How do I replace the stand hinge mechanism?

Patricia ... what is the size and thickness of the support piece and the size of the holes seen in the video. I assume we will have to make this ourselves. Also, the screws put into the support piece. Where can these be bought?

Your iMac could be covered under an Apple 'recall' repair:

According to a new internal service document, Apple will be offering refunds to customers who paid to repair or replace a faulty iMac hinge. In the service document, Apple admits that some 27-inch iMac models shipped between December 2012 and July 2014 may have been affected by an issue with the display hinge. It would not be able to support the weight of the screen, making it impossible to adjust because it just kept tilting forward. Apple sent the internal service document to Apple Authorized Service Providers, and it was then obtained by MacRumors.

The issue stems from Apple using plastic washers in the spring mechanism, which are not strong enough to support the weight of the display. Many customers affected by this issue have reported hearing a crack or a pop sound before the hinge stopped working, which can be attributed to the plastic washers breaking.

According to MacRumors, Apple will replace the weak spring mechanism on all eligible iMac models for free, regardless of warranty coverage. Just last September, Apple extended its hinge repair warranty program to cover 2012 and 2013 iMac models for five years, up from the original three-year period.

The impact on you: If your 27-inch iMac faced this issue and you paid for a replacement or repair, you may be eligible for a refund. You can contact Apple by phone or online to initiate the refund process.

In addition, if your iMac hinge is currently broken, you can get it replaced free of charge, regardless of your warranty. Start by booking an appointment with the Genius Bar at an Apple Store or by visiting an Apple Authorized Service Provider.

Apple no longer covering this 5 years after purchase. Just brought in today and was given the bad news

Got out of warranty hinge repairs approved every single time. The “genius” will just quote you policy. Go directly to the top.

Not to be confused with earlier models where you can insert a credit card in the backto release the mechanism or any modified Vesa mount, the above models were just factory standard.

The issue is a really poor design, where 2 high tension metal springs are held in place by 2 plastic couplers. The cheap plastic couplers (if that's the correct term), eventually break, and the screen leans forward. Many users report hearing a loud crack when it breaks.

You can't adjust anything here. You can't tighten ANYTHING to fix it.

The temporary fix is to wedge some foam between the back of the display and the screen. I’ve also seen users inadvertently cover the rear vent when propping the up a screen, which cooks the machine…

You have to purchase a new hinge assembly (see photo), it has the same cheap plastic couplers while the whole assembly is metal. I was unable to find just the couplers on their own, but a little imagination or a few episodes of MacGyver might help with some small washer ideas...

See the attached 2 images below

• You can see that pretty much everything has to come out of the iMac to get to the hinge.

• The second photo shows the metal hinge, with the screw that holds the "coupler" in place. The high tension metal springs (1 each side) are held in place by the flimsy plastic couplers!

Hope that helps (and makes sense). 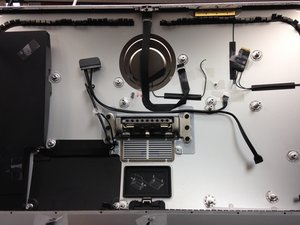 Hi. Same error as we have with our 27" iMac. I made a piece in wood that stands between the screen and the table. Works, but it is outraging that Apples uses such an idiotic solution to crucial function!

If you want to replace the hinge mechanism, there is also a simple way of repairing the old one. Just disassemble the complete hinge. Now replace the plastic couplers by metal washers. It is very hard to press thru the high tension of the metal springs. To avoid this remove the two bolds and attachment braces at both sides of the hinge. It is much easier to attach the new washers with the screws now. After attaching these assemble the braces again. Altogether no problem here, everything is working perfect again.

I fix this problem all the time. It’s the spring tensioner its made out of plastic. I fix it by using a metal washer in place of the plastic piece.

OK, this is a VERY big job as most everything needs to be taken out to get to it!

If you haven't taken apart one of the newer "Thin Series" of iMac's I would recommend not even attempting it! This is were you should let Apple fix this as it will be cheaper in the long haul. Do you have an Apple Store near you? If you do I would bring it in, otherwise you may need to ship it to them.

But before we go forward here why do you think you need to replace this part?

Super pain in the a$$ but not sure what parts to order, or where to order from. I've pulled all the components before for an SSD swap so somewhat seasoned with a tear down.

A simple fix-it is to place a rubber cane or crutch tip ( available from almost any pharmacy) between the stand and the body of the computer. It's even adjustable. And then proceed to give Apple !&&* for not making this endemic problem a recall. I had a 27 inch iMac , model 2007 for 8 years with never a hinge problem. With it's replacement a 2013 model the hinge broke after two years.

Thanks Mark, excellent solution! Had mine propped up with Duplo blocks but wouldn't allow for adjustment.

Try this for a quick fix: www.themachack.com It slides right on and rectifies this problem in just moments.

@Tommy - Not bad! Have you gotten one yet?

Forget the $250 repair job! Go to Lowes and purchase 2"x 4ft (1.2m x 5 cm) Velcro (Industrial Strength) with the "sticky back". Place two, 2 x 3 inch pieces (the non "fuzzy side" just below the Apple Logo, place, two, 2 x 3 inch pieces of the non "fuzzy side" on the upper part of the stand, just below the upper curve. Place two *" pieces of the "fuzzy side" (note don't peel of the sticky backing and bridge the upper and lower "non sticky" pieces. Adjust the monitor face as desired.

Do you have a picture for this? So I can see what it looks like? Thank you for the great idea.

Because the price in Brazil to fix this by Apple after warranty expires is outrageous! Cost almost U$500 and they ask 30 days for the service. The options are fix by myself or through this piece of junk in the trash.

I would still speak to Apple before you dismiss them! Apple often will fix a system which is just out of warranty for free! More so if it's a new design as in this case.

Do the hinges break through repetition of use or is it due to stress gradually building up on the plastic retainers over time. I'm looking to buy a 2012 27inch iMac used but I don't want it to go bang as soon as I take it out the box, even if it is 8 years old. Also, if the hinge has survived on an 8 years old machine does that mean it's ok and unlikely to break if it's lasted this long ?

The spring is anchored by this plastic so over time even without use they break!

If the system was fixed a metal part was used so it won't break again.

Sadly, you have no way of knowing if yours is fixed or not without taking it apart.