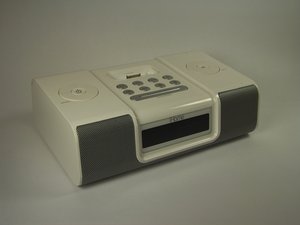 Part of the iHome family of docking stations, the iH9 features a charging port, speakers, a digital clock, and radio for iPods and iPhones.

Why wont my iPhone fit?

Make sure your iPhone has the same connector as the iHome iH9. If it has the same 30-pin connector, make sure the iPhone is fully seated in the docking station and the correct device "sleeve" is in use.

Your mention of the words "new iPhone" leads me to believe you're trying to plug a device with a Lightning connector into the iHome's older generation 30 pin dock connector.

Apple's proprietary 30 pin dock coonnector was discontinued late in 2012 in favor of the Lighting connector, which is smaller, faster and double-sided so you can plug it in in either orientation.

The sixth-generation 160 GB iPod Classic and the iPhone 4S were the last Apple devices to feature the 30 pin dock connector. So if your iPhone is a 5 or greater, you have a Lightning connector that won't plug into the iHome.

That being said, according to the iFixit device page on the iHome, there is an adapter available that will allow you to plug your Lightning port-equipped phone into the iHome. I personally don't have any experience with these sort of adapters, but I do recall my brother stating that he'd had no luck making them work himself. You mileage may vary, though, so if you want to use your iHome it would be worth a try.