Learn what an LCD display is, and how LCDs work.

LCD displays use a relatively new technology, but all of the early teething problems have long been worked out and the prices of LCD displays have fallen to the point that they are now mainstream products. A good LCD display, such as the ViewSonic VP191 19" model shown in Figure 11-2, provides top-notch image quality in a compact package. Although traditional CRTs have advantages of their own, most people who experience the bright, contrasty image of a good LCD display will never return to using a CRT monitor. 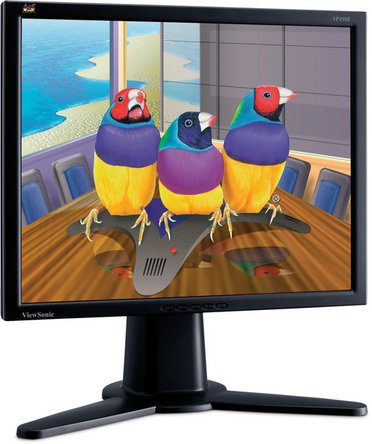 WHY ARE THOSE STRAIGHT LINES CURVED?

If you convert from a standard CRT display to a flat-screen CRT display or (particularly) an LCD display, you may notice an odd effect. Your eye and brain become used to seeing the curved surface of the old display as flat. The new display, which truly is flat, looks concave! Straight lines appear to bow inward, particularly if you work close to the display. The effect is so convincing that Robert actually held a straight-edge up to his new LCD display. Sure enough, the "bent" lines were straight. Don't worry, though. The optical illusion disappears after only a couple hours' use.

CRT monitors were the dominant PC display technology until recently, but that has changed. For displays bundled with new PCs, LCDs exceeded CRTs in popularity by late 2002. By 2005, LCDs had also begun to outsell CRTs in retail channels. Lower cost and other advantages of CRTs ensure that they'll remain available for years to come, but the emphasis has definitely shifted to LCDs.

Here are the important characteristics of LCDs:

LCDs are available in analog-only, digital/analog hybrid, and digital-only interfaces. Using an analog interface requires converting the video signal from digital to analog inside the PC and then from analog to digital inside the monitor, which reduces image quality, particularly at higher resolutions. Synchronization problems occur frequently with analog interfaces, and can cause various undesirable display problems. Finally, analog interfaces are inherently noisier than digital interfaces, which causes subtle variations in display quality that can be quite disconcerting.

Unlike CRT monitors, whose phosphor-based pixels respond essentially instantaneously to the electron beam, LCD panels use transistors, which require time to turn on or turn off. That means there is a measurable lag between when a transistor is switched on or off and when the associated pixel changes to the proper state. That lag, called rise time for when the transistor is switched on and fall time for when it is switched off, results in a corresponding lag in image display.

Everything You Always Wanted to Know About LCD Response Time

When LCDs first appeared, most makers specified rise-and-fall response in milliseconds (ms), the time required for a pixel to change from black to white (rise time) and then from white to black (fall time), also called the black-white-black (bwb) response. Nowadays, in addition to or instead of bwb, many LCD makers specify white-black-white (wbw) response and/or gray-to-gray (gtg) response, the time required to go from one level of gray to another.

And gtg times are not necessarily comparable between different brands, or even between different models from the same company, because gtg time depends on which particular levels of gray are tested. Do we specify gtg response for going from an almost-black gray to an almost-white gray, or for going from one almost-middle gray to another almost-middle gray? It makes a difference.

Some makers also specify the rise time separately. For example, we found one display that was advertised as having a 4 ms response time, but the product data sheet on the maker's web site listed that display as having an 8 ms response time. Both numbers were accurate, as far as they went. The 4 ms time quoted in the ad referred to rise time (black to white). The 8 ms time quoted in the technical documents referred to bwb response.

All of these response-time numbers can be different, and there's no direct relationship among them. If you look only at ads (as opposed to technical documentation), it's often not clear what type of response time is being specified. If a response time is quoted without qualification, such as "16 ms," that ordinarily (but not always) refers to bwb response.

A fast bwb (or wbw) response time is more important for general use, while a fast gtg response time is more important for gamers and graphic artists. For general use, bwb response of 25 ms to 30 ms is acceptable to most people, and 16 ms to 20 ms preferable. For gaming and other demanding applications, bwb response of 12 ms is generally acceptable and 8 ms preferable, with gtg response no slower than 8 ms and 4 ms or less desirable.

Relative to CRT displays, LCD displays have the following advantages:

LCDs are brighter than CRTs. A typical CRT has brightness of about 100 candelas/square meter, a unit of measurement called a nit. (Some displays are rated in foot Lamberts (fL); one fL equals about 3.43 nits). A typical LCD is rated at 250 to 350 nits, roughly three times as bright as a typical CRT. CRTs dim as they age, although a brightness control with enough range at the upper end can often be used to set an old CRT to near original brightness. The CCRTs used to backlight LCDs also dim as they age, but generally fail completely before reduced brightness becomes a major issue.

Even good flat-screen CRTs are subject to objectionable reflections when used in bright environments, such as having the screen facing a window. Good LCDs are much superior in this respect. Short of direct sunlight impinging on the screen, a good LCD provides excellent images under any lighting conditions.

A typical CRT is about as deep as its nominal screen size. For example, a 19" CRT may be 19" from front to back. Large CRTs may be difficult to fit physically in the available space. Conversely, LCDs are quite shallow. The panel itself typically ranges from 1.5" to 3" deep, and even with the base most LCDs are no more than 7" to 8" deep. Also, where a large CRT may weigh 50 to 100 pounds or more, even large LCDs are quite light. A typical 17" LCD might weigh 10 pounds, and even a 23" unit may weigh less than 20 pounds. That small size and weight means that it's possible to desk- or wall-mount an LCD with relatively inexpensive mounting hardware, compared to the large, heavy, expensive mounting hardware needed for CRTs.

Stated LCD display sizes are accurate. For example, a 19" LCD has a display area that actually measures 19" diagonally. CRT sizes, on the other hand, are nominal because they specify the diagonal measurement of the entire CRT, part of which is covered by the bezel. For example, a nominal 19" CRT might have a display area that actually measures 18.1" diagonally. A couple of lawsuits several years ago convinced CRT makers to begin stating the usable size of their CRTs. This is stated as VIS (viewable image size or visible image size), and is invariably an inch or so smaller than the nominal size.

Depending on size and other factors, a typical CRT consumes 100 to 160 watts while operating, while an LCD consumes only a quarter to a half as much power. Using an LCD reduces your electricity bill directly by consuming less power and indirectly by reducing the heating load on your air conditioning during hot weather.

If you've decided that an LCD is right for you, use the following guidelines to choose one:

Recommended Brands: Our opinion, confirmed by our readers and colleagues, is that NEC-Mitsubishi, Samsung, Sony, and ViewSonic make the best LCDs available. Their LCDs particularly their midrange and better models provide excellent image quality and are quite reliable. You're likely to be happy with an LCD from any of these manufacturers.

what is written not display but still can open browser,can watch video but cannot open start menu,cant open control panel,