Hello fellow iFixit-teers, my name is Josh and I am a fairly new member of the team. I was hired in mid-June of 2017 into the parts testing department. Interestingly enough, i had actually never heard of iFixit until my brother, Andrew, was hired as the kitting room supervisor in May of this year (Yes, we are brothers in case anyone has not yet noticed). Because he was one of the supervisors for that department, naturally it was the department i applied for. Even though i applied for an inventory associate position, i was surprisingly hired as a parts tester and even though it wasn't what i was expecting, i was still excited to learn and become integrated into the crew.

A little about myself...

where do i begin? I suppose it all started back in 1994 when i was born at the Santa Maria hospital at about 3 am. Fast forward about 11 years later, i was down on one knee in a kickboxing gym in Arroyo Grande while having a junior Blackbelt being tied around my waist. from age 6-11, i had cycled through every belt color of hawaiian Kempo up until junior black ( i couldn't receive a legitimate blackbelt because i was still a minor). After that, i transitioned out of Kickboxing and into skateboarding where i would eventually be granted a sponsorship for a skateboarding company and store in downtown SLO. Skateboarding has and always will be one of my greatest passions in life and even when i become too old to partake in the sport, i will still watch and think about it everyday.

I am currently enrolled at Cuesta College where i am working towards getting an AA. while i am not majoring in anything at the moment, i am seriously considering aiming for a degree in animal science. Whether it be Veterinary Technology, Animal behavior, or even just basic training, i would very much like to see myself end up in that general field of study. When i'm not at work, i am most likely at the beach lounging and picking up trash or taking my Golden Retriever Maya to the park where she gets to burn off her puppy energy with my girlfriend's Boston Terrier/Jack Russel Mix.

Thank you all for reading and hopefully you all feel like you know me a little better now.

I wholeheartedly look forward to getting to know all of you as well and settling into a spot with the company that Fixes the world! 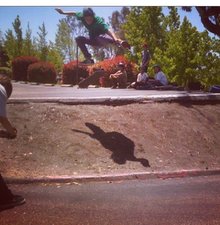