Inbound sales at Dozuki. I strive to be the friendly helper on the other side of the phone that can really make a difference for Dozuki's clients. 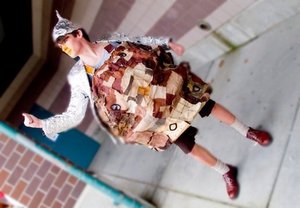 Me as a baked potato. This was from my Odyssey of the Mind team in 2010.

I'm from California. I spent my childhood in San Jose, then moved up to the Sierras to finish up those formative years. There I got really into Destination Imagination and Odyssey of the Mind, which I believe after all these years is the reason I'm so creative. For those that don't know, both programs are world-wide creative problem solving challenges that hone skills like teamwork, leadership, and creative use of materials (making things out of trash and making sure aforementioned things don't look like trash). In 2010 my team won First Place at Worlds. 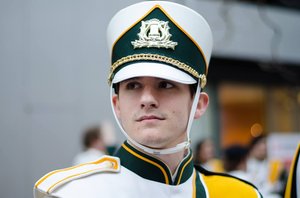 At Cal Poly I made the most of my creativity love for critical thinking and majored in Economics. Many look at the dismal science and ask me "why?", but that is the exact reason I chose my field of study. With many a why to answer and many a problem to solve, I felt that I could truly flourish. From breaking down the reasons we make decisions, to analyzing relationships between people, institutions, or systems, it all fascinated me. In fact, my senior project was a game theoretic analysis of international policy between the US and Russia. I'm proud to consider myself a bonafide economist.

Me with a prop.

I started working here as a fresh graduate in June 2016. My main responsibility is to develop Dozuki's relationship with innovative firms from many industries. Considering that Dozuki is the software that powers iFixit, it's an easy product to get excited about. Helping clients solve their documentation problems on a regular basis is a very fulfilling experience.

During downtime I try to hone my skills by reading up on behavioral economics and thinking about how I can apply principles such as nudges and choice theory into salescraft. That is a word, right? Or shall I say deallurgy?

Hopefully this section will protect me from being asked the dreaded "what do you do for fun?" question for a while.

They say most humans are about 60% water. Well, I'm 60% music. If I'm not creating music, I try to at least listen to it. I learned to read music at about the same time I learned how to read English, so I consider myself bilingual in that regard. I picked up trombone, my instrument of choice, when I was ten and the rest is history. I've since learned to play every brass instrument (including tromboon), attended multiple Tuba Christmases, and served as a drum major. These days I consider myself a pioneer of the experimental trombone discipline. 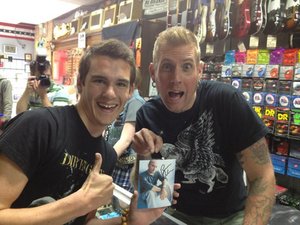 Me with Brann Dailor of Mastodon and a signed picture of Phil Collins.

Speaking of experimental, I love weird music. Be it 70's prog, high middle ages polyphony ahead of its time, or post-avant jazzcore, I love it all. Why write in 4/4 when you can write in alternative 7/8 9/8? I absolutely adore early Genesis for it's whimsical subject matter, overzealous use of mellotron, and Phil Collins on drums. That guy is my hero for bringing such a jazzy style to progressive rock. And no, he did not ruin Genesis after Peter Gabriel left. You can thank Tony Banks for turning the band into a well-oiled pop machine.

I also love to be active in general. Exercise is a priority in my life and I make sure to get in as much of it as I can. There's nothing more fulfilling than a heavy set of squats, a fifty yard freestyle sprint in one breath, or a conquered peak on a backpacking trip.

I'm an avid nonfiction reader. I try my best to continue my economics education beyond college, but I'm also deeply interested in history and philosophy. It all seems to come together in the end anyway. 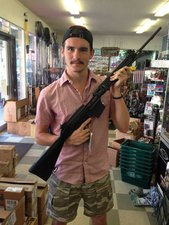 Me with a Cold War friend, the FN FAL.

I find marksmanship to be a very zen-like pursuit. Perhaps it's because the focus and discipline it takes to improve or the respect I have for the marvel of engineering that is the firearm. It's one of my favorite pastimes. 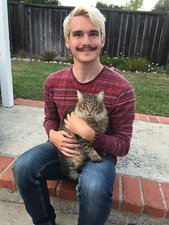 Me as a blonde with the neighborhood dog.

For nine months I was blonde. Not many people that met me recently know that. I recommend trying something new and different every now and then.

For some reason, I love everything from the Low Countries. Medieval Burgundian history from the struggle to acquire Flanders to Charles the Bold's reckless attempts to unite Lotharingia is one of the most interesting periods I've studied. Franco-Flemish Polyphony is a movement in early (14th century!) classical music that really connects with me spiritually. Trappist ales are some of the best beer I've ever tasted... and I love beer.

Me wearing a curtain.

Oh, and I was Muammar Gaddafi for Halloween once.