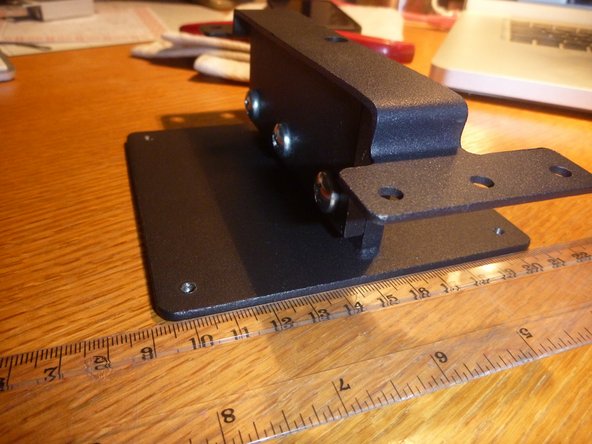 The late 2012 and 2013 27" iMacs had to be ordered with a VESA mount because they did not have the removable stand. However, there is a third party VESA adaptor available, which I successfully installed. I took a few pictures as I did it.

If you have the tools to get to the point where you can see the stand (through the iFixit guide mentioned), then you'll have the tools necessary to remove the stand. There are two possible exceptions. I found a flexible shaft 'screwdriver' (really a torx-driver) very handy (see step 2). Also, I used a metal file to modify the VESA mount adaptor mentioned in the parts list (see step 6).

Yes, I'm guessing this will probably void your warranty. Here's my personal take on Apple products and warranties: if it works when I get it, it's unlikely to have a warranty issue within the warranty time-frame. This comes from experience with between a dozen and 2 dozen Apple products - so, many, but not hundreds.

I'm sorry, I don't have any experience with 21in iMacs, so I don't know if this will work with them or not.

The bracket, according to the mfr's eBay page, does NOT work on 21.5" models. Also they don't seem to be selling it any more, although I have emailed them.

I am principally interested whether it is possible to remove the stand at all. I have read that it is welded. However the final picture in iMac Intel 21.5" EMC 2638 Teardown shows otherwise. And EMC 2638 is indeed the late 2013 21.5" model.

that's what I found but not tried yet: http://bookyard.es/product.php?products_...

For makers it would be great to know the hole pattern so one could make a part and not relay an someone to sell it.

There are 9 screws and 2 pins. What size and distance do the holes have relative to each other. Would be great to get this information from someone who took his iMac apart.

any idea, where I still can find one of those mount adapters? Iversalproducts seems not to exist anymore... :-/

For those looking to convert their 27" 2012-2015 iMac's to a VESA mount, it can be done using OE parts. I'm only writing this because I never found anything on the internet confirming this worked, I just took the gamble and it worked out great.

You need to order 4 parts (assuming you already have a Torx set):

I have a 2012 and ran into no issues - worked perfectly, I make no promises that you'll have a similar experience but, at least to me, it felt very straight forward. I got all the VESA parts from www.thebookyard.com and the adhesive strip kit here on iFixIt.

You will need a 5 point Torx TS15 bit for the pentalobe screws that attach the backing plate to the tongue... technically not the correct bit, but there are only two screws and I felt zero slip from the 5 point TS15.