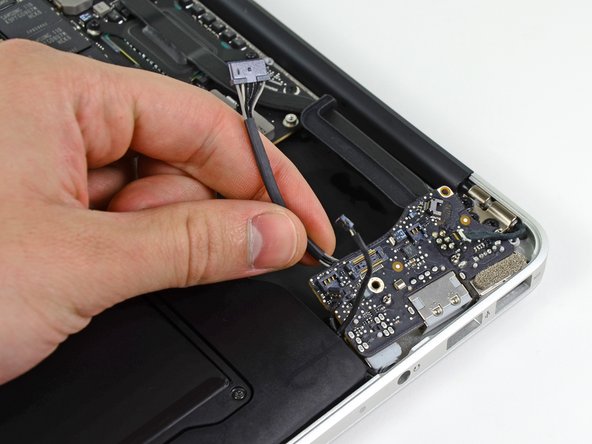 Use this guide to replace your Air's I/O board which houses the MagSafe DC-in port, a USB socket, and the headphone jack.

My I/O board USB socket was dead with a bent pin. Replaced it following this guide, everything went perfectly, and I've got working USB again.

Diagnosis procedure: shine a flashlight into your suspect USB socket. If you can see a pin against the back of the socket, there's your problem.

Step 15: had I read all the comments, I would have avoided breaking the microphone connector (thank you Lorenzo Cangiano all the same!). But the guide should have a red exclamation point warning about not prying on the front of this connector when it doesn't respond easily to prying under the cables. It is not obvious that one should not be able to pry on all sides, and the guide only has an "Information" note for this.

Just followed this guide to replace a burnt out/corroded power socket. I bought the part from this site. Now the power is fixed, but the USB socket does not seem to mount anything, as in it doesn't work. I have not tested the headphone port. An interesting observation: the first time I turned my macbook back on using battery power it said battery not available. I turned it off and on again and this resolved the issue.

Does anyone have any ideas about the USB port not working? Have I bought a faulty I/O board from IFixit?