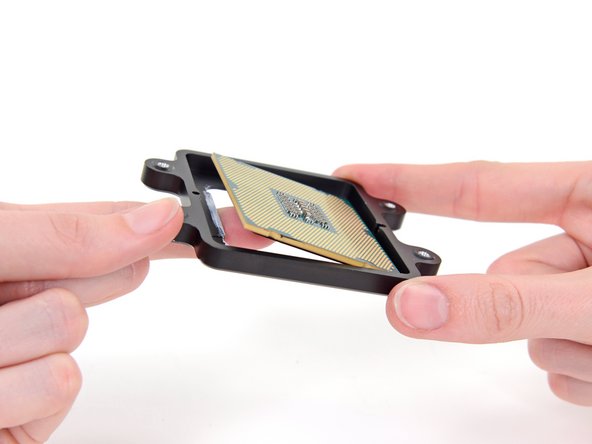 Use this guide to replace the CPU.

Removing the logic board means you'll need to reapply a layer of thermal compound.

Before beginning any work on your Mac Pro: Unplug the computer and press and hold the power button for ten seconds to discharge the power supply's capacitors.

Be very careful not to touch the capacitor leads or any exposed solder joints on the back of the power supply. Only handle the board by the edges.

So this means I can buy the smallest Mac Pro now and upgrade the CPU in a few years, right? I like you guys! :)

Yes, Ben, you could. 2nd hand CpU's are available on eBay, Amazon and various companies. Review suitability of your proposed CPU that it will fit the socket FCLGA2011, and pay attention to voltage. ECC support, and TDP. Switching CPU isn't an easy task and it has risks replacing it.

Hi Ben, I found an interesting website with more info regarding CPU upgrade:

Can you please provide some benchmarks, i wish to do the same, but need to see if doing this myself creates any problems

Just replace it? No need to change bios?

I didn't need to change anything, no update required: booted into OS X and the CPU was detected.

Pete, here are a few places to look for an E7 CPU to see if it will fit/work in the Mac Pro late 2013 with the FCLGA2011 socket. Check for voltage, ECC support and TDP (base 130 watts for default CPU's) and other specs: http://www.cpu-world.com/Compare/index.h... and search for socket 2011 compatibility. Also, check http://ark.intel.com/search/advanced?s=t... , this is Intel's database for its products; it appears only the E7v2 and E7v3 may fit the board. Do your homework and find a suitable CPU. This way I found that my replacement E5-2687Wv2 would work.

I can not remove the screws . A screw is changed shape ....

i had the same issue ! Very strange. I wonder why tho ! Is it because of apple warranty or juste a random issue. I’m gonna have my unit check by some pros …

Got it down to the cpu bracket and I'm now confronted with 4 screws that are round and have no space for a screwdriver. Does anybody have experience with this??? What a nightmare!!!

Jesse Billson and acabanillas00, you've run into Apple's new tamper-evident screw stickers. Before you proceed, please note that removing these screws will leave behind clear evidence to Apple that you've been inside the computer, leaving you no wiggle room on your warranty. To remove the screws, first press down with the T10 screwdriver around the centers of the circles, where you would expect the holes to be, and you'll tear right through the stickers (you may have to blindly rotate the screwdriver a bit to get it to line up correctly, since the stickers conceal the holes). Then, just unscrew as normal.

A couple more notes: new Mac Pro 2013's started shipping with these CPU screw stickers some time in 2015, and if you take an older Mac Pro 2013 in for repair, Apple will quietly add the stickers if, during the repair process, they end up stripping the computer down to the CPU bracket.

I haven't found a satisfactory method for preserving the stickers, nor a replacement, but I imagine it could be done...

An added note: When reinstalling the CPU riser board, Apple sets the torque of the screws to 10.5lbs/in. This might effect the heat transfer capabilities, or performance of the processor itself.

Completed E5-1650v2 (default 6-core 3.5GHz CPU) upgrade to an E5-2687Wv2 8-core 3.4GHz CPU. Scariest job done ever. Geekbench 4 results Mono/Multi Core: E5-1650v2 (default CPU) 3688/15900 with loads of OS X stuff running in the background, E5-1650v2 (default CPU) 3901/17425 after switching off background processes, then E5-2687Wv2 (upgraded CPU) 3989/22447 with loads of OS X stuff running in the background. Comments on the process above: check your bit size prior to applying your driver, as I found just a few screws having a different bit size than explained above (too small i.e. 5 vs 7, or 8). Also, power supply assembly is hard to put back into place as was before: it's all a very tight fit! Don't force, simply retry fitting if it doesn't fit the first time. Extra information: after original CPU removed, it's a bit tricky to get the new CPU in place as you'll be putting the motherboard on TOP of the CPU according to the process above. Hope this helps.

Not difficult at all - take your time and have some sort of organizer for the various screws you remove. And a torque wrench is a good thing to use so you don’t under- or over-tighten anything.

Thanks much for this guide. I just completed installation of an E5-2697v2 (the same 12-core CPU that Apple ships) that I purchased off eBay for $550. I found a few things that were not quite accurate and left notes above in the relevant steps. Basically, both places that claim that the screws are T7 were actually T8 in my machine (apparently assembled in mid-2017 due to the fact that it came with Sierra 10.12.6 installed). Also, as a previous comment noted, my machine also had tamper-evident screws holding the CPU heat sink bracket (step 25). The T10 driver makes short work of the stickers. By far the trickiest part of the reassembly was installing the CPU heat sink bracket. After starting screws on one side of it, it takes considerable force to bend it down enough to get the screws on the other side started. And it’s hard because at the same time you have to keep the CPU from falling out on the opposite side. Really not too hard. Just get a nice work area with plenty of light and keep track of your screws.

Thanks for the guide !

Just a note : the 2 bottom screws were T8 on mine aswell.

Hello, this is a little off topic, but was wondering if anyone has figured out how to run the Mac Pro 2013 with the cylinder shell removed? I want to do some bench testing with it off.

Hello please . Can anybody help me? e bought an E5-2690v2 for my mac pro 6.1 all the perfect change but when it takes a long time of stress working with 4k it shuts down and throws me an error. I do not know what to do I'm desperate I bought it instead of the 2697 for the many comments and for the money I had available now I'm very disappointed I can not find a solution and changed the processor 4 times to discard more components but with the serial 1620 there are no errors but it is much slower please help me :) sorry my english use translator I only speak spanish. thanks greetings

Awesome instructions. Took all of 45 mins

I just installed a E5-2697v2 replacing the 3.7 Quad. What a difference! I’m very pleased. Concerning iFixit’s ‘Difficult” rating I would say it was a breeze for me. I took my time, about 1:45 hours and really found nothing difficult. If your’e handy and careful, it will be fine. I had one slight issue the arose from the stud on the processor chassis came out instead of the screw. I used a 7mm open end wrench to remove from the screw and reattached to the plate. I paid $280 for the 12 core and was well worth it!

Hello. I’ve been trying to get this upgrade to work for a few days. I end up with a system where the fan is running full speed and a “kernel task” is taking up almost all of the CPU. After reading about the CPU and kernel task it seems as though this is a way for the CPU to protect itself. A throttle so to speak. Everything was running well until the upgrade and even a subsequent downgrade back to the original CPU picks up the same issues. I’ve tries PRAM resets and SMC resets. Neither change the CPU/kernel task issue. Is there a missing step? Some sort of reset that needs to be done?

Additionally, I’ve gone the the trouble of replacing the CMOS battery as well. Still no change.

Following Apples posted instructions for SMC reset doesn’t do anything.

Another thing I’ve noticed is that PRAM “zapping” doesn’t work nor do simple things like software reboot or shutdown. As if the SMC really isn’t able to do what it is supposed to do. When I do a restart the system will either shutdown (and not reboot) or just flip back to the login screen. Also when you power on then hold the Command - Option - “P” & “R” keys it just shuts down but not reboot.

A run-down of things I’ve tried.

Environment - At the start.

Both were working just fine prior to CPU upgrade attempt

After CPU upgrade the following symptoms:

Fan running at full speed. (using a fan control program is not a good option - see below)

Kernel Task taking up all of the CPU resulting in super slow response.

After Downgrade back to factory CPUs the same issues persist.

Have tried the following:

Down grade CPU (no change)

Reset SMC (the apple way and also the rEFIt/rERInd way)

Several different CPU bracket tightnesses- less tight and the way it comes from the factory (bracket arms all the way to the logic board). *** in the OWC video method, you will have trouble replacing the PowerSupply unit because the CPU bracket screws will be too high. There seems to be some disagreement about what is either even possible or recommended based on the they original state)

Clean OS install from both High Sierra and Mojave

Set and reset all cables and connectors

Current State - Both Mac Pros (one with the 12 core cpu and one with the factory 4 core) boot but are severely CPU throttled and fan running at full speed. Neither are really usable. There must be something missing that this would happen across two nearly identical computers.

Any and all help really appreciated.

I’ve done a number of these - going from 4 or 6 core up to 12 core. Straightforward thanks to this guide.