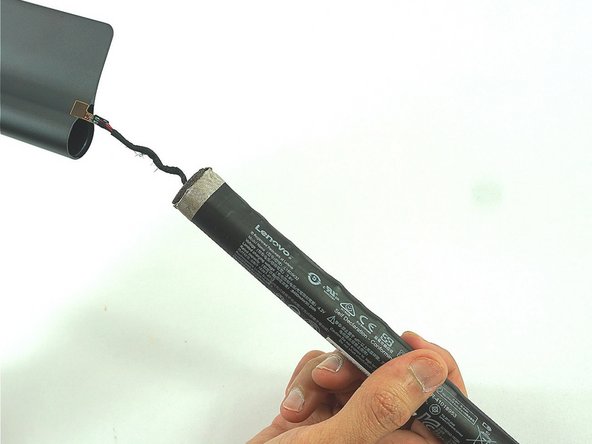 Very good. Nice operation. For me it takes 10 minutes for get the battery out the device and 4 minutes to replace all. Thanks!!

Seem to be missing the step where you disconnect the battery. That seemed real important as I'm sitting here with the tablet in bits trying to see how to do that bit.

Matt, I just pulled mine apart and the problem might be that you have a different revision of your tablet. Mine had three screws on the backplate but one of them is next to, not in the sd card slot, and there were only 2 screws on the “aux port" (speaker for me) not three.

If so, I had to remove the camera module to get the battery cabling free, it is threaded through a shared camera/kickstand bracket that looks permanent. Removing the camera was creepy, it takes more force than I like, but doable:

Pull the camera wiring harness from the motherboard, unscrew, I'm my case, everything in that area, I have broken enough stuff because of missed screws. The camera itself has 2 screws holding it down via the same plate that the battery cable snakes through. After that it's just a lift/pry thing until the module pops out.

Wish I could put up some pictures but I don't see a way, hope this helps you or anyone else. This tablet is easier to get into then most, but it would be easy to fubar on this if not careful.

Hi, I have a problem with the battery of lenovo yoga tab 3 10.1 and need a replacement for it. Could any one please let me me know where I can get the battery?