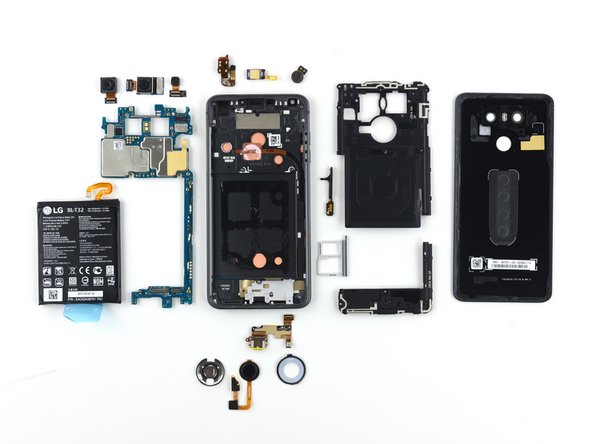 Barebones disassembly of the LG G6 to determine its repairability.

How do you take out the volume buttons?

I love the way you stand for the people centric solution.

I have owned Lg g6 for bit more than a year. Just recently It showed “Welcome to Fastboot Mode for boot loader unlock” and the screen got black. I tried to soft boot it after the logo nothing was coming.

I took it to the lg service centre they told me it was a motherboard issue and they need to replace it and it was costing around 250 dollars, there was no point repairing it when they refused to back up the data.

I saw some online videos and learned that Lg has this recurrent issue since long and solution is heating the motherboard and posing it back. I did it 2 times, but it is still dead.

Now the screen is complete black, there is no haptic feedback or anything happening.

Can you suggest how to repair or trouble shoot the issue.

Hi! what do you call the outer metal rim of the phone? the One where you have the buttons and the memory cards attached too, can that be replaced?

Hi All, I recently attempted this “cracked screen” repair and thought I could save some time by ordering the LCD assembly pre installed in the mid frame. After tearing down the phone by following various YouTube videos I ran into the “removal of the volume buttons” issue. After doing a google search on “How to remove LG G6 volume buttons” I found 2 videos that show the process… Another issue is transferring the curved copper “heat sync” flex part in the middle of the mid frame curving to the right and down along the side…one video shows I need a “thermopaste”… I gave up, reassembled the phone, and returned to customer. I ordered something called “Arctic Silver” and will attempt the same repair of this device again today. Any advice will be welcome..