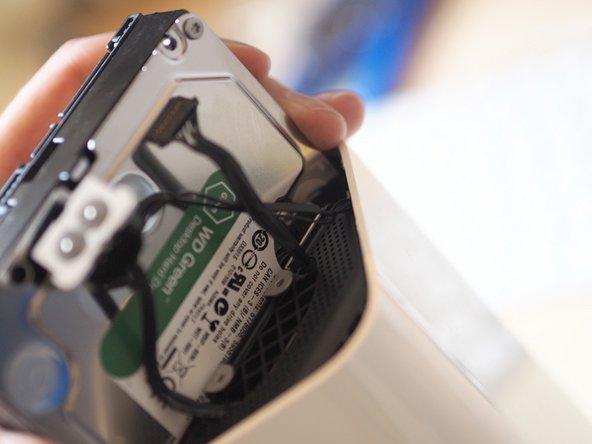 Outgrown your Time Capsule? This guide describes how to swap the hard drive in a Time Capsule A1470 from the original 2TB Seagate drive to a 6TB WD Green.

That's just about it - one upgraded Time Capsule.

That's just about it - one upgraded Time Capsule.

Considering the pain of pulling the base off the device, I'd recommend testing the new drive before putting that back on. I had an old Mac Mini with the same design, and it was an absolute pain to upgrade the RAM and HDD for the same reasons. Nothing like realizing that the SATA port isn't _quite_ seated right after reassembling the whole thing... O_O

Absolutely — as soon as you have the cables hooked up to the drive and board again, you can just plug the power cable into the jack even before re-seating it, check the drive out and then finish with the plate, power jack and base.

Thank you for this step-by-step lesson. Apart from a skinned finger joint and playing hide and seek with a mounting screw, my 2TB Airport Time Capsule now has a 5TB Seagate drive that fit perfectly into the rubber mounting blocks. Those pesky micro connectors are not designed to be fitted by fat old Western fingers. And yes, having fiddled with Macs of yore, I too have leart it pays to test a drive in situ before reassembling.

I put in a WD Green 3 TB disk(WD30EZRX), everything came apart and went together fine, but when I started it back up, still have the same issue of "internal disk needs repair". Any ideas on what the problem might be?