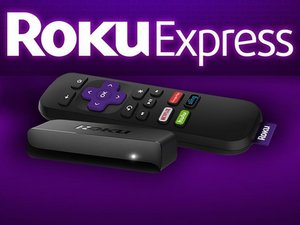 The first version of the Roku Express was released on October 6, 2015. This version of Roku has been a big success because of its "Plug 'n Watch" philosophy.

Roku is a line of digital media players manufactured by Roku, Inc., an American technology company. Roku devices offer access to streaming media content from various online services. The Roku line was introduced in May 2008 with its first Roku model, which was developed in collaboration with Netflix. The Roku series has helped to popularize low-cost, small form-factor set-top boxes designed for over-the-top media consumption.

The low-end Roku Express was released with four other new models (Roku Express+, high-end Roku Premiere, Roku Premiere+, and top-of-the-line Roku Ultra) in September 2016. The Streaming Stick (3600) was carried over from the fourth generation as a sixth option. The Roku Express uses a Universal Serial Bus (USB) cord for power and HDMI for picture and sound.