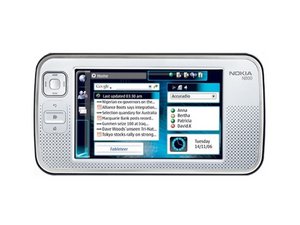 The Nokia N800 allows the user to communicate using Wi-Fi networks or with mobile phone via Bluetooth.

The Nokia N800 is a wireless Internet appliance from Nokia, originally announced at the Las Vegas CES 2007 Summit in January 2007. N800 allows the user to browse the Internet and communicate using Wi-Fi networks or with mobile phone via Bluetooth. The N800 was developed as the successor to the Nokia 770. It includes FM and Internet radio, an RSS news reader, image viewer and a media player for audio and video files. The successor of this device is the Nokia N810.