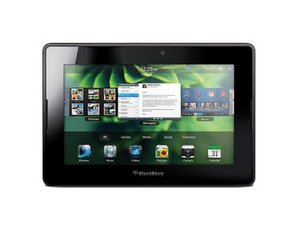 A mini tablet computer designed by Blackberry and manufactured by Quanta Computer in 2011. Model number RDJ21WW.

Playbook got to 0% battery and now it won't turn on?

My Playbook got to 0% battery and now it won't charge or turn on. What are my options?

A- do you have a solution for me so that I can fix it myself?

B- If not, how much does it cost to get the battery replaced?

C- I didn't buy warranty for it but is there a law that will mean I can still get refunded or a replacement if I bought it under 6 months ago?

Tell me everything you can.

Anyone know what to do I turned on my playbook after so many years and forgot my password so I thought I could ask for another I was wrong I accidentally deleted and wiped I think but now it says something about an update that has to be done. I pretty much messed it all up anyone know what to do.

You need the original charger, nothing else will work:

Not sure if this is too late-but thought I would offer an alternative suggestion. The same thing happened to my playbook, according to a friend who works for RIM they had to recall a bunch of them for a very simple problem.

Take a look at the charging port inside the playbook, the piece inside needs to be level. You need to use a small metal object to make the piece level in the center.

This worked for me. The trick is to always keep the blackberry symbol facing upwards, if it is put down, it ruins the alignment of the piece again!

Hope this is helpful. It saved my playbook :)

omg thank you very much this help me a lot am very grateful thanksssssss !!!! you save my life here :-) thankssssss !!!!

OMG my Playbook has not been working for 2 months. I tried the

alignment thing and it works!!!!

If only RIM were as helpful!

What can we use to alighn it.?

Thank you so much it work by leveling the little metal piece, Thanks again.

My BB tablet is dead an not turning on, when eva i plug in my charger i see the red led light 4 abt 10-15 sec then it turns off i a yellow ish green ish light blick 5 time and than nothing happens after that.... Am frustrated rite nw

I have a rapid charger and a regular USB charger. I let my Playbook get so low, it wouldn't turn on or charge. Since the charging system is software controlled, the playbook can get so low the software won't run to charge it. I had to "stack" charge it, which means putting the charger on for 10-15 seconds, taking it off, putting it right back on for 10-15 seconds, taking it off, and repeating this process about 50-100 times. The charger will charge for about 10-15 seconds before it shuts down because the Playbook software isn't taking over the charging process. Until the playbook gets enough charge to run the charging circuit, it won't take a prolonged charge. By repeating this process of "stacking" all of these little charges together, you are able to build up enough charger for the Playbook to run the charging circuit software to fully charge itself.

Another time, I let my Playbook get too low and hooked it up to my desktop and was told I needed to download some software to use it. I said "ok" and it began downloading the software which would take about an hour. The problem was the USB connection to the desktop would not provide enough power to run the Playbook in order to download the software AND charge the playbook at the same time. The playbook would just run out of power and shut down in the middle of the process. I had to hook up the rapid charger and the USB cable to do this; and it worked fine.

Good luck and enjoy your Playbook. I love mine.

to viswanath, look on the side of the playbook at the charger port, no need to take it apart, use a magnifier if needed check the middle bar in the port is straight not bent.....if it is bent gently level it with a flat thin narrow blade ie metal nail file....when you put the micro charger lead in make sure the blackberry "symbol" on the plastic head of it is facing up..... it will not charge it the other way as I found out the hard way.......hope that helps...

It is definitely the charging cable. Although the usb tips fit they are not all the same and I’m assuming you don't have the original one. If you have a few lying around try them all. When it is charging the light will definitely flash. Also when you look at the port make sure the  pin is centered. I have only two cables that will work with mine and they seem to be older. If you have to adjust the pin in the playbook use a small screw drive or something make sure it centered and keep trying different cables, the tip should fit snug around that internal pin but not necessarily around the opening.

Now I have tried all my cables including Blackberry and another blackberry charger. You talk about the middle pin. I am using the center inlet like a phone inlet. Are you talking about the one to the right?

I tried leveling the metal in the port but my playbook will still not turn on :s does it matter what you use to allign the metal?

I suggest using a plastic probe. See my post above. If the playbook will not turn on, try a new charger -- perhaps one that a friend has. You may need to wait 10-15 minutes to see signs of charging if the battery is totally exhausted. So plug in with your charger first, wait 20 minutes and see...patience pays. If that does not work try a friend's charger. In all cases be extremely gentle, don't try to ram the connector home with all your strength.

If that does not work, the USB connector on the Playbook may be physically fdamaged enough to require replacement. That is a major disassembly and desoldering/resoldering operation. Before doing it, you need to find out the part number for the replacement USB connector.

I suggest buying the Blackberry Rapid Charger for the Playbook an connecting that to the 3 charging dots just to make sure the Playbook can charge. If the Rapid Charger works, then you might have a damaged USB port or a bad charger.

I tried all of the above disconnecte dteh battery even , no help any thing else guys?

mine will transfer all the files, boots up great but wont charge

Charging mine with the rapid charger and BlackBerry sign facing up right as I read all lol but it could also be the rapid charger like it is for me. This holding everything upside down works for me cause I saw on the part where it connects (the three prongs ) to the playbook, one (the middle one ) Is lower than the other ones saw a video on YouTube can't find it now or I would post it but said the spring gave out and that why it doesn't stay up but if you hold it upside down it falls down to the same level as the other two and whala it can now charge thanks hope this can help someone else.

My battery had got too low, so having the same start / recharge issues. Tried all the tricks except opening the device, but then happened upon a Nokia charger (5V 550mA) that must be just that little bit stronger than the standard USB charger. Popped that on and went straight to the desired flashing light that indicated initial charging. Shortly thereafter up popped the start screen and we are now happily charging up the battery with no need to reload or lose anything. Big sigh of relief.

Tried using a nail file to level the pins. Tried turning it on and off every few seconds or so. Tried using both the usb port charger and the Blackberry rapid charger. Must have done something right as it is now charging. The tablet belongs to a friend of my daughters and she is lost without it, so happy to get it going again for her. Will tell her not to let the battery get that low again. Thanks for all the awesome suggestions.

I used one of thise novelty chargers about 4 in long that some companies pass out. Too late I discovered that all USB cords are NOT universal after trying to charge w a desktop. Im not familiar w a fast charger but this small one got it started then a wall charger fixed it.

I have tried all these things and nothing has worked. One thing different that when mine starts to charge the light does not blink but glows yellow and the “Logo Blackberry Playbook” displays but nothing happens no charging and it will not goes to start page just continues to display logo. What is up with that? Any thoughts?

You can try magnetic charger if you have one..it is the third port in playbook...I used it as An alternate way for charging until this method worked.

Does not work. Tried everything nothing works.

@alison Thank you so Much bro. I was using my magnetic charger for my playbook since last 5 years and Due to that I wasn’t able to connect it to my lap and no shops had the pin. I randomly came across this post and did as you said and guess what “ my playbook has came back to life”. Even though I own an iPad , my playbook is very close to my heart…thanks a ton bro..