I have an MacPro6,1, the 2013 year model which has the kernel_task going to 900% and fans at full speed. I’ve run the diagnostics tool and it came up with the following two errors:

• PPM001 - There may be an issue with the power management system

The mac powers on fine, but is extremely slow. The SSD is cleared so no software is installed, running from Big Sur from an USB is also really slow.

I’ve opened up the machine and there was a lot of dust. Cleaned out a lot and have put it back together. No change. The water indicators I’ve seen on the boards are not red, hence there is no liquid damage from what I can see. Nor can I see anything weird on the open sides of the boards.

I got the 6 core D500 model with 16gb ram. It also has some HDMI issues from time to time, having the screen flicker (like it’s not getting a propper connection); however using thunderbolt > HDMI works fine.

Does anybody know what I can do to resolve this issue? Do I need to replace the backpanel/PSU, or is there another issue which I can look at? 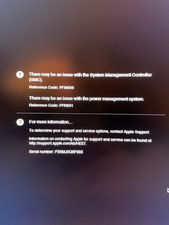 When your system encounters an issue within SMC, SMC will push the system into CPU safe mode! Basically ramping up the fan and lower the CPU’s clocking which is what you are seeing with the kernel_task going to 900% !!

This is to protect your system from over heating and is an expected reaction.

At this point your logic board has a problem with one of the sensors voltage sense lines. This really requires someone with deep skills working on 2013 Mac Pro’s to fix your logic board which is a rare skill set.

I own one (which I love) and even I don’t go this deep. I would recommend you visit an Apple Store let them fix it as they have access to the parts.

I was afraid of such an answer. No way to reset/re-program the SMC chip?

Reprograming it to disregard the sensor is like turning off your fuel gage to your car just before you go on a long trip across the Australian outback with no fuel stops along the way, just not wise!