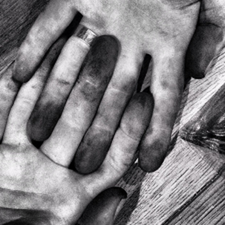 27” Thunderbolt display. LCD element works. The LED backlight, not so much. With brightness turned all the way down, a picture is faintly visible. Turn the brightness up, and the backlight cuts out. It’s kind of like a 3-way lightbulb (remember those?), on which only the lowest-wattage setting works. This started a couple weeks ago, intermittently at first, then all the time. Monitor wasn’t bumped or relocated when it failed, so I doubt it’s a loose connection.

Tried a different laptop (another 2015 MBP), same result. On disassembly, the backlight cable didn’t seem loose; I reseated it anyway, to no effect. Verified 24.0V on the nose at the test point with a digital voltmeter. Built-in cable has some cracking and fraying around the Thunderbolt plug, but same happens with a separate Thunderbolt cable plugged into the auxilliary Thunderbolt port.

I’m guessing that either the backlight part of the screen element has failed, or that it’s a logic board problem. Any way to tell what it might be? Thank you for your suggestions!

The displays logic board controls the brightness. Here the way the backlight LED’s are controlled by Pulse Width Modulation (PWM) to create a dimming effect.

Unlike traditional lighting such as incandescent, dimmable LED bulbs don't rely on voltage to dictate their level of brightness. Instead, they essentially rely on a cycle of being on and off. These cycles operate in a matter of milliseconds, so you won't be aware of them actually turning on and off. For example, if you have dimmed your lights to 10%, they will be 'on' for 10% of the time and 'off' for 90%.

If I'm reading you right, that the backlight illuminates at all (only at minimum brightness) indicates that the problem isn't with the backlight itself, or its cable, but with its control system on the logic board.

Replacement logic boards are going for around $40 on ebay. Sounds like a cheap fix to me.

EDIT: I've gone ahead and ordered a pulled, tested replacement logic board ($40), and a new TB/MagSafe cable ($15) to replace the frayed one while I'm about it. Parts should be here in about a week. I'll report back with findings then.

The replacement logic board arrived yesterday, somewhat delayed by a shipping mix-up and a snowstorm. I installed it and the new power/signal cable this morning. Now I have a working monitor again, without having to spend several hundred dollars for a new one, or creating 24lbs of tech junk. Thank you, @danj, for identifying the source of the problem!