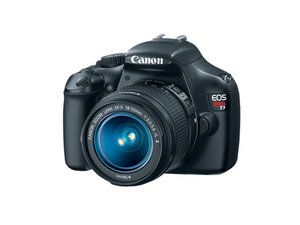 The Canon EOS Rebel T3, also known as the 1100D, is a continuation of Canon's entry-level line of DSLR cameras, the Rebel series. It features an 12.2 MP sensor and a DIGIC 4 image processor.

Is this worth fixing or should I let it die broken?

TL;DR: Did something nice for a family member who needed to use it for photos. Supposed to be short term, made it a 9 year loan by beating me into submission and then breaks the USB port. Not going on beyond that here, but I’m never doing anything nice for him again. OR letting him use anything I own.

So this happened yesterday when I was called in on my day off, so who knows when this happened - could have happened on a work day and he didn’t tell me until the port was completely dead end but that’s not important - what’s important is it’s broken. In this case, what happened was that I was called in to check it (and by god was this so important I couldn’t do it later) and the issue was the USB port is broken.

So when he pushed it again, I took a look at it knowing full well in my gut that he broke the camera. So when I looked at the camera, I immediately knew but wanted to be sure. Yep… Got a PS3 controller and confirmed what I suspected; he broke the camera. I brought it up and made a hard mention he could buy his own, but he didn’t take that and insisted on removing the card… why I was honest is beyond me. I’m hoping this is an easy fix, but I’m also doubtful because he dropped it once and when I got on him then he treated me like bad blood and I stupidly gave in, so I’m afraid of trace damage.

So I’m stuck with 2 options:

Would I be better off getting the cost of a replacement/replacement hardware and letting him keep it and he can use it until he dies, or taking it back and praying I can repair it?

Broken usb port problems are extremely common. Even sometimes caused by a slightly too large usb cord connector, etc. It’s usually fairly straightforward to fix, unless it’s totally loose and it tore up the board. In many cases it’s still fixable depending on where it tore.

I do laptops and tablets & often have to use superglue and jumper wires, so far have had about 75% success.

USB ports are directly connected to the motherboard, in any canon service workshop they will the replace the whole board and it will be expensive, I suggest you take it to an independent repair shop that fix laptops and such, they will be able to put it back in place, when customers come with broken USB ports to our shop I give the following options:

If they are not using the USB port for doing tether work and such it is the most sensible choice.

Not to air the dirty laundry I have against him since this trainwreck because there was ZERO SURPRISE he does this (but I'm accountable to him), but I'm not paying for a board and it's a 10 year old camera - it's not something I'm going to bother fixing. Things have advanced a lot since.

Either I'm taking that camera back and telling him he can forget about anything nice like that ever again even if he's desperate and genuinely needs it or he's buying it off of me at this point at pre-damage market rate and he better pray it's not FUBAR and turns NFG quickly - because that will be the LAST time.

At this point, I'm perfectly okay with saying goodbye to the camera if he's fair, or getting it back (and the used price) and he can figure it out.