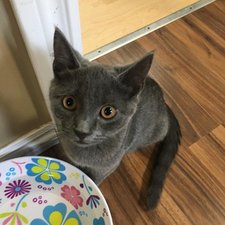 Water damaged logic board... warms up?

Small story about the 6s in question.

So, my mom drops her iPhone 6s in the toilet. That wasn’t the problem. She then cleaned with soap and water, which killed it. At that point we tried the tried-and-false rice trick (my mom is not a computer expert) and I did suggest taking the phone and putting the phone upside down, so the water would be away from the components which are critical to the phone booting.

Now, about a month later, I’ve cleaned the board with some isopropyl alcohol (my idea of putting the device upside down worked, btw), and I plug it in, and… nothing out of the screen. After a few minutes (I’m not exactly an expert), I felt which parts were warming up on the board, to see which parts of the phone were doing something. To my suprise, a lot of the board was warm, with the exception of a few parts that might never produce heat. Is there a chance the controller on the screen is fried, so it’s unable to output any video and causing the phone to fail to boot?

I no longer can test, cause along the way I damaged several cables and one of them was the digitizer cable… I’ve attempted 3 repairs, this one, a coffee damaged (also my mom, the only two that have water damage come from my mom) but working MacBook Air (2014) which has no backlight (funny that the cleaning fluid made a board had more corrosion than a caffeinated drink, and with this one the device might still work, and I know it’s working as it displays through the Mini DisplayPort), and an Apple Watch Series 1 which had a dunce screen that barely worked. The latter was the only successful one, and I use it every day. I don’t know wether or not I should get a “processor can’t load the system” device to see if this board should work.

Also for those wondering the most of the connectors were so tight water couldn’t get in.

The logic board has to be thoroughly and properly decontaminated; that means removing the shields. Ideally, an ultrasonic bath with Branson EC solution should be used. In the absence of that, a toothbrush and some >90% IPA should at least get all of the surface corrosion off. The problem is that water usually gets underneath the IC’s and that is what causes the issues.

If the phone doesn’t work after that, there’s not much chance you’ll ever get it to work, and even if you do, it will probably be unstable or have a few subsystems that don’t work properly. Most microsoldering repair shops no longer offer water damage “repair" for this reason.

I'm not willing to put a lot of time into the old phone anyways.