rear camera looks like this and I don’t know why! I bought it second hand and I could have sworn I checked and the camera worked fine but I could be wrong I then replaced the screen, and noticed that the camera was funny. I don’t see how replacing the screen could have done this so maybe it was messed up when I bought it.

Since then, I disconnected the rear camera and brushed both the lens and the inside of the glass cover with a cotton swab, which didn’t make any difference unfortunately.

would rather not replace camera unless I know I 100% need to as it’s not a cheap part. 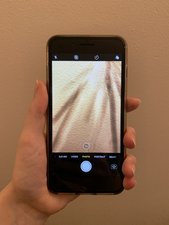 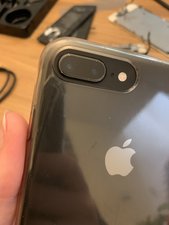 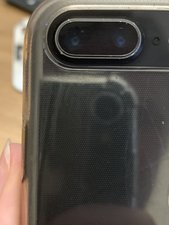 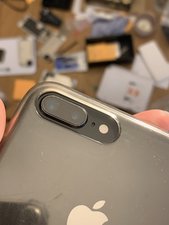 I think that might be lint.. but think you’re right anyway as looks like it’s slightly damaged on the “larger” camera. So would you just replace the outer glass? No need to do the whole camera right? Thanks!

Yes, your cover glass is slightly damaged! So the light defracts from the chip in the cover glass. 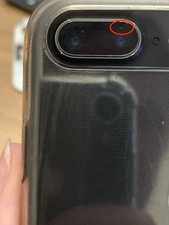 It looks like the right lens was just some lint but the left lens appears to have a small bead/grain of something in the top right corner on the inside surface. I though it was a reflection now its clear in the new pic to be something.

You should be able to lift the camera unit to reach the inside surface to carefully clean it. Try a short blast of air first, if that fails try a dry small cotton swab then a very lightly dampened swab with reagent quality isopropyl alcohol as you want to make sure you don’t leave a film.