Performed PSU Swap - Worked for a while, then POP! Dead iMac?

I performed the PSU replacement tutorial as listed here. I purchased parts from here, followed the tutorial to a tee, everything went perfectly, no probs!

iMac performed as usual for one evening (just browsing and iTunes) then today I was editing a video in Final Cut Pro when about 2 hours into it I hear a very audible “POP” noise, a fuse tripped in my house power box and there was a sketchy electrical smell from the top of the iMac.

Any ideas what to do next?

I’m half thinking to bite the bullet and contact Apple, however I’m reluctant as my initial post when this started happening over on the Apple Discussions Forum has gone unnoticed: https://discussions.apple.com/thread/250...

First Apple doesn't answer most of the posts in the discussions.

Yeah, that's been my experience over the years too...

First its sounds like you have a power issue within your house power wiring.

First you should go to your local hardware store and get a simple plugin power tester something similar to 3-Wire Receptacle Tester There cheap and give you a simple Go-No Go test. Make sure your outlet is properly wired.

You should also check your breaker panel to make sure its properly grounded. Your ground line should be attached to a metal water line exiting the building or tied to one or more grounding rods buried into the ground.

The next thing you’ll want to do is contact your power provider asking them to lend you a power meter for a couple of weeks as I suspect you are encountering power issues. These just plug into a spare outlet and monitor the fluctuations of your power and can be printed out to review. That should give you guidance on whats happening. Some of the better UPS’s offer this function as well.

As far as your system, contact iFixit to get a replacement. Hold off putting it in until you’er sure the power issues have been fully checked out.

Hmmmm, powers urges to the house have never been a problem in the past Dan, but I will look into it.

Is it possible I have used the incorrect PSU? The part number I ordered was:

In any case you ordered the correct part.

Yeah, after checking it out further I definitely ordered the correct part. Very confusing that this should happen.

I'm suspecting you have a hot ground. This could be a badly wired device, more often its the outlet is miswired.

Hmmm, the more I look into it the more I am leaning away from the power being the issue. I mean, if it were everything else on that board would have blown too right? On that board I had a GoPro charging, a LED light rack and a Mobile Broadband modem and all of those appliances were not effected by the "POP!!".

After emailing with iFixit, their excellent customer service advised they would send out a replacement PSU (and adhesive strips). Awesome!! I was so impressed with iFixit shipping times from USA to Australia on my initial order the other week I made a video about it: https://youtu.be/9n5KIHD1f8M

Anyway, the FedEx guy arrived today and oddly the replacement only included the adhesive strips, no PSU. This was obviously a mistake so I’ve sent off an email to work out what happened. I included images of the package and how it arrived here (1 bubblewrap “envelope” with just the adhesives/pizza cutter - labelled as “1 of 1”).

In the meantime, I set about opening my iMac again as I’ve heard it’s extremely difficult to remove newly added adhesives. That was indeed correct and I created a decent crack on the left side of the screen doing so. Totally my mistake. I was kinda !#^&@@ off that the PSU didn’t arrive as it means missing another weekend of live streaming on my YT channel while my iMac is out of commission. I accept I used too much force with the pizza cutter. Lesson learnt. 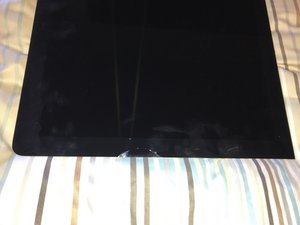 After taking the faulty PSU out (I made another video: https://youtu.be/c4StaBnYu0E) I noted the blown part was (so I’ve been told) a Thermal Switch?

And so that’s where we are right now. I’m awaiting reply from iFixit to see where the actual replacement PSU wound up and we can go from there.

At least having this image of the blown out part will possibly help someone else? 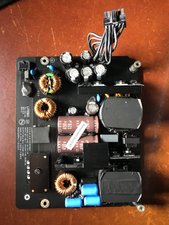 Enlarged to show blow out: 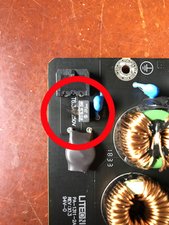 Received the second replacement PSU today, it's all in now and been running for the afternoon with no issues.

I actually have not sealed up the screen yet but the adhesives are in place. I think I want to see at least a weeks worth of use before I am confident to use the adhesives - last time those fresh adhesives were almost impossible to get off!!

Happy to here you got your system up and running!

Don't forget to score and accept the answer.

Well, it's been running for 4 days right now, but I still have yet to close the screen. I guess I don't really fully trust that it's gonna last lol!

Get the line meter from your local power supplier keep it for a good month. You could also just jump to a good UPS which offers line monitoring.