Is this motherboard where DC jack goes fixable? 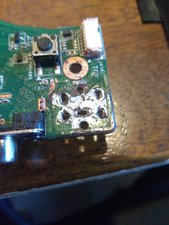 Well I bought a new DC jack to replace the old one on the motherboard on my Asus G73SW-BST6 model where the DC jack goes on the motherboard looks damage since the green coating is removed and the copper layer is shown is it still fixable or buy a new motherboard? All motherboards I seen on eBay have no cpu processor installed and graphics card the graphics card is removable but isn't most likely the cpu processor is soldered to the mothetboard? If you need a clearer picture ill take apart my laptop and do so since this picture is way different than how it looks now.

Here a picture how it looks on the other side of the motherboard where DC jack goes does it look better? 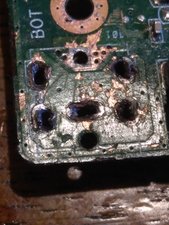 Update : I open up my laptop and try to remove any solder I can from DC jack but not sure if this is solder since it not sticking to my homemade copper wick

It's the cpu that is removable the gpu is soldered to the board. That part of the board could be repaired but it looks like the old port has been pryed off as it shouldnt have the solder mask that badly damaged. You will need uv curable solder mask and a uv light to recover the copper otherwise there's a chance you will ground all the connections. Clean it up will flux, solder wick and soldering iron then post a

@tech_ni thanks for your response seems more technical to fix it. Will it be wised to buy a motherboard and which one will work for mine I have a picture of my motherboard specs

it would probably be easier