MacBookPro only boots when an external screen is connected

When booting up the process suddenly stops and and a black bar appears on the upper part of the screen. Then nothing happens anymore.

I tried to find out if it was a graphics problem and connected it to a screen over the Thunderbolt port. It booted up normally and i can even disconnect the screen and work normally. It even works when i only have the VGA-Thunderbolt adapter connected without the screen. (For DVI and HDMI the cable/adapter isn’t enough, there needs to be a screen attached, guess that’s a digital/analog thing)

He had NVIDIA CUDA installed and i removed all that because apparently that isn't supported in Mojave anyway. This didn't change anything though.

Does anyone know what might be going on here?

Carefully examine the display for any impact anomalies. It can even be the size of a pinprick. 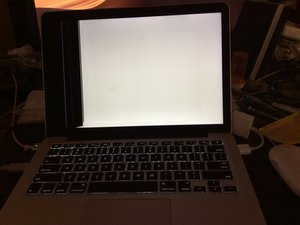 No nothing like this. It's a straight line about 2cm wide from left to right and it only appears after it booted about 2/3. The fact that it works when i plug in the VGA adapter makes me think it's not an issue with screen itself.

Please post a photo of what you are seeing as this is a very unusual problem.

To be on the safe side first do a PRAM reset and an SMC reset. If this doesn’t work are you able to boot into network recovery on the internal display? This will rule out a software issue.

See this guide on booting into network recovery: https://support.apple.com/en-gb/HT204904

Thanks. I forgot to mention, did both of that and tried to boot from an external drive. From the external drive it's not a black bar but a thin fuzzy line which looks a lot like graphic errors.

In that case try running Hardware Diagnostics: https://support.apple.com/en-gb/HT202731 plug in the external monitor if you can't see anything in the diagnostics.

I just did a safe boot and that booted normally. I thought i had tried that already...

So could it still be some remnants of the CUDA stuff?

it could be, Maybe do a reinstall just to be sure its gone.

is it definitely a 2014? it might fall under this program : https://www.apple.com/support/macbookpro...