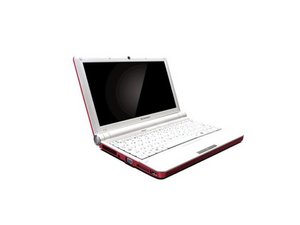 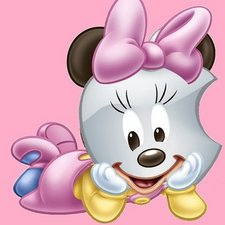 SO i’ve been snooping around in this pair of laptops i received and i noticed something a little strange - well allot strange.

The CPU heat spreader/sink appears to have a cut-out for what i believe is the Intel graphics die / chip. It is not making contact with the heat pipe and as in the picture - it’s completely sectioned out purposely. Ive seen my share of processors and myriad heat spreaders, and i’ve never seen an exposed part like this, further compounded are my concerns because with some digging, i found a Dell machine using the exact same chip, and their cooling solution has a full coverage heat plate! - (also in the image.)

I honestly cant think of a viable reason/excuse for this, all i can imagine is that with some even-slightly-er heavy work load on the chip, it will hit a thermal throttling Brick Wall almost instantly.

Has anyone ever seen this before? Is there a reason for this?

What can i do to cover it properly? Blob of thermal paste? 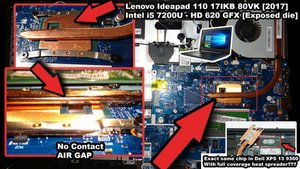 I would speak with Lenovo to be sure this is the correct configuration. It just maybe! Keep in mind the GPU runs cooler than the CPU so this could be by design!

Ok good idea, i'm going to make a post on the lenovo site then, thank you :)

Ok i asked Lenovo about it, and all i got was another user commenting that he thought it was fine - "thats the whole point, is to let the air get to it, so it can take the heat away ..." HAHHAHAHAHAaa .. okkaay .. you should read the rest of what he said .. it was funny, i'm going to say back, okay, well then you should open up your computer, and take the heatsink off your cpu - and just the let the air get to it - it'll be fine :) :) omg i was laughing.

Unfortunately i could NOT get any official answer in over a week, soooomethings fishy here ........ like, someone in their department didn't want to answer it, and told everyone to ignore it ... for SOME kind of reason ..... the plot thickens .....

read below i added some Update material if you're interested.

Really, i just don't want any manufacturers to start doing anything silly with their hardware, people should know if something nefarious is going on.

@maegan_mouse yes of course we catch your drift. It is only a plot if it can be proven that a different design would be more beneficial. I'd try to get my hands on a different design heat spreader or modify what you have to validate your suspicion. I do not expect any manufacturer o give you any answers. After all that will be their R&D and does not have to be explained. I think that if you can validate your hypothesise you may get a better response from them.

Agreed, i would have to do some testing to prove my suspicion, and i have just the family member to do it. I grew up around super Techies, and i do some technical writing on the side for some publications, using different names. I just maaay have come across an interesting little scoop, but you're right, i would have to prove a noticeable amount performance difference, i'm going to brush up on some bench marking stuff .. and see if i can extract a good story :)

Ps. Good thing you're level headed, cuz i can get pretty excited :P

this is done by design. If you have any concerns about this, run a temp control software (not sure what OS you are using) see what your temps are. Dell does things different than Lenovo and neither one has to be right or wrong. There is no reason to change or modify anything unless the computer shows evidence of overheating.

Agreed, it's absolutely by design, this is the first heat plate over a chip i've ever seen with one of the dies uncovered, very peculiar. I have dug around today and found no other examples of this being the case - especially among any other lenovo model - i must have looked at 40 different machines so far, all have the chip fully covered 8\ ... I understand this is a lower-end model but .... well, i'm going to get to the bottom of this.

and no, i wont modify anything needlessly, but you must agree this is strange!

@maegan_mouse it sure is different. I imagine that it actually cost more to produce a heatsink like that. It probably would have been easier to just leave it enclosed. The advantages/disadvantages could be checked by finding out what the temp differences are between the Lenovo heatsink and the Dell heatsink, during operation.

OK update, I did some limited testing,

i ran cinebench r15, kombustor and passmark full test - not the best gauntlet but something for now, and at this point, i'll say i think its inconclusive - but - hopeful ! - This is some of what i gathered ...

-no gpu temp available, only CPU - no manual fan control.

Machine is getting hot baby!

------- now all i could find was a YT video with the same chip tested, different laptop - and the number 323 matches (so thats sOmething) however thats CPU usage only - the frames per second i could not find it that was matcched.

see, if i'm right that there may be some throttling from it being exposed, then it would show in the FPS

The other 2 tests i couldn't find any corresponding data, the passmark output is this:

If anyone can tell me if that sounds ok?

I guess until i can get it to plow though some video encoding, or some 3d rendering, i wont really know if it's an issue. but like what you were saying, Obviously they designed it this way, and i don't think it's a mistake, also because both of the laptops i received are the same. i don't think they would put out a machine that has an outright flaw, my concern, just to put it bluntly, is if their intent is to maybe ...lets just say.. create a market model, which is possibly augmented by their lowest models being -Made-To-have- less performance - to reflect their entire line.. catch my drift ...No one should accept that.. humm

It could be an aftermarket heat sink/pipe. Some thermal paste should do the trick, but if you’re experiencing issues, try and find a better aftermarket part.

Hold that thought! Double check another system to be sure this is the correct heat sink before you start altering things. The issue is often the GPU needs less cooling than the CPU so it could be this way by design!

Thank you for your input guys, i'm definitely going to dig deeper on this, something just doesn't seem right here....

Yes, Intel onchip GPU is cooler than CPU. That is true.

The reason maybe this:

GPU part is about 0.3mm lower than CPU part. If you cover both parts by thermal paste, you will make much worst GPU ventialtion, than in cease, when it is not covered.

But I can not believe, that the air ventialtion is sufficient. I saw many such laptop models with fried CPU/GPU.

So my lognterm working solution is this:

In the beginnig I stressed up CPU/GPU by some benchmarks simaltaneously for many hours and I reched maximum temp about 72 deg Celsius.

So I think, tehre is no risk this way and better solution then empty hole.