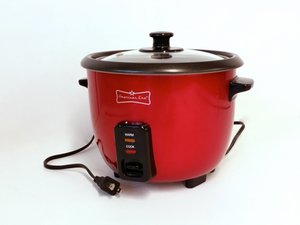 My rice cooker shocks me when I touch it?

I just bought a rice cooker recently. It's a philips HD-3017. I've never used a rice cooker before so I accidently took the pot out and forgot about it and well....I poured the rice and the hot water straight into the inner part of the rice cooker. I didn't realize what I had done until I found that the water which I poured came out of the rice cooker from its sides its kinda like....the water leaked out off the sides so i quickly unplugged it and flipped it over and started drying with a towel but unfortunalty the rice is stuck inside it and whenever I shake it I just hear it moving but I can't get it out and when I googled about what to do most people would just say ti flip it and there will be like a nail that you'd remove and then open it and the rice will come out but mine doesn't have any nails

@danalombar let's see what you ricecooker looks like post some good pictures of the outside, the inside and teh bottom of it with your question. Use this guide 在已经存在的问题里加入图片 for that. It does sound like you have some of the rice mix in your heating coil

If you just bought it it should still be covered under warranty. Take it back and get another one.

I think your rice cooker is ruined. Rice cookers aren't very expensive; throw this one away and buy another.