I have a 27 inch Apple Thunderbolt that I purchased new, about five years ago. Shortly after the extended AppleCare warranty expired I began to notice dark vertical image artifacts in the screen. These artifacts were especially noticeable when I would change the desktop wallpaper to a single, dark color. I have included a photograph taken today (some eighteen months later).

When I first noticed this problem, I called Apple Support to enquire about whether there was a fix, and how much. I had earlier purchased a late 2011 MacBook Pro that had died due to a now-famous problem with the graphics chip. Fortunately for me, Apple authorized a local service center to repair the MacBook with a new mainboard. It seemed that Apple had issued a 'silent' recall on the MacBook problem. I was hoping for similar luck with the expensive (>$900) display. No joy! Apple told me that the display panel was probably at fault, and it would require replacement; a very expensive proposition for a 3.5 year-old monitor. They also told me then, that they had decided to discontinue selling displays. Effectively I was S.O.L.

The artifact effect has been slowly getting worse, and while it doesn't impede my ability to work on the monitor, it is distracting. I did a little research on these 'artifact ' images' on 27 inch Apple displays last week and found several postings on YouTube where people removed similar problems from iMac displays by removing the display panel, separating the backlight from the display element, and cleaning out dust deposits trapped within the display panel itself. I tried this fix but it did nothing to remove my display artifacts.

I suspect that the origin of this problem is heat damage to the LG LM270WQ1 SDB3 panel used within my Thunderbolt Display. This thing was designed while Steve Jobs was still alive and running Apple, and it is well known that he had a nearly obsessive disdain for cooling fans in Apple products. The Thunderbolt Display has only one cooling fan drawing air through its enclosure, over a convoluted flow path, that appears to bypass the region where my artifacts now appear.

I really don't want to give up on this display because (1) it still works, (2) it was freaking expensive, (3) I don't think that something this expensive should be limited to only a lifespan of three years. However, I am trying to get a writing project done before July and I am literally staring at this problem for 10~12 hours per day! I am considering just kicking the Thunderbolt to the curb and buying a similar monitor from Dell or Asus (at less that 50% what the Thunderbolt costed). I have tried replacing the cooling fan, cooling fan temperature sensor, and power supply board with no improvement. What I am looking for here are suggestions for what else I might try to get this problem to go away. I know how to solder and perform fine electronic work and I am not timid about opening up Apple products to affect repairs.

I have included a picture of the image problem in its current state and a few shots from last weekend's attempt to clean the panel. In closing, I am increasingly becoming soured on Apple and their products. I 'switched' about twelve years ago because I couldn't stomach what Windows Vista offered and Apple had an image for producing higher quality hardware. After the late 2011 MacBook Pro debacle and this Thunderbolt Display breakdown, I am increasingly skeptical that paying more money for Apple products that only irreparibly break down after three years (the maximum AppleCare warranty) is justifiable. Apple's apparent policy of ignoring/denying design flaws in their products or flippantly advising customers to 'just buy a new [iPhone/iPad/MacBook ... etc.]' isn't doing anything to build my confidence in their company or products. 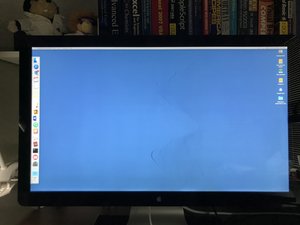 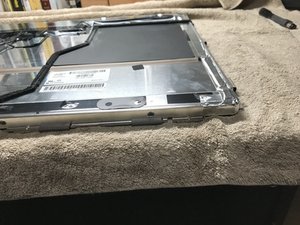 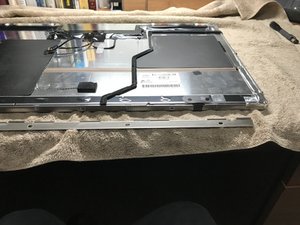 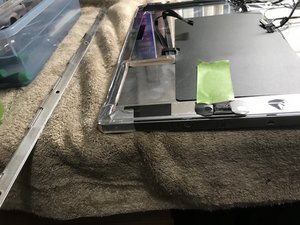 While heat can damage the LCD, it would take much more than what the power supply and LED backlights are producing. So don't blame Steve ;-}

While dust can build up on the cover glass and the face of the LCD its self, this is not your problem which you have likely already figured out.

The problem is within the liquid crystals sandwiched between the glass plates the make the LCD work. The material is like a spring as you can see in this vid: TFT / LCD Monitor - How it works! (3D Animation).

The crystals twist to re-align the polarized light to pass through the second polarizer. Overtime the crystals loose their spring so when power is applied they don't go all the way so you get grey shading. This shading is where the image was strongly set within your background image (persistence).

This image persistence can be improved by using different patterns: Here's one that I found helped: Screen Burn In Fix Ghosting Fix. Sadly, this won't remove all of it as you really need a new panel.

Computer monitors all face this issue! The reason is the image is more often static unlike a TV image which is continually changing with all of the motion. If you are gaming on your TV then you can encounter the problem then.

Newer chemistry in LCD's is helping, but there are just physical limitations! Just like a rubber band there is a only a number of stretches before it snaps. Here the springiness of the crystals also have a life span.

spburrows what I see are different shades and different shapes which lead me to believe that this is not an LCD issue but most like an issues with the diffuser sheet. Disassemble the actual panel and take a look at the sheets. Post some images of those with your question. Remove the screws around the frame, remove the EMI tape and disassemble the panel. Make sure that you remember how the sheets are layered, they all have a different function.

@oldturkey03 - At first I had thought that too.

But, spburrows bought the display new so I don't see how the diffuser sheets could have become damaged from being mangled in their handling as the display hasn't been opened until now. I've damaged them on the few MacBook Air systems and had to replace the sheets. The only thing would be if the display got wet and the moisture had managed to inside the sealed assembly sandwich and condensed. I could see this happening in a laptop, a desktop display...

@danj, this is not an LCD error. I see this on large screens a lot. Heat, humidity etc. all can cause a degradation of the polarizer and color filters. No piece of twilight zone portal software is going to work for this. "bought the display new" I read it as being at least 5 years old.

Yes, I've seen a few laptops having liquid/humidly damage. But, this display is sealed quite well with foil tape. I guess we'll need spburrows to tell us if he lives in a very humid environment. If not then its the LCD.

As to the twilight image I've used it a few times and unless I'm getting hypnotized but the spinning ;-} It did help a bit.

I work on some pretty large screens as well as smaller screens on a regualr basis. Some of those appear to be well sealed while others are not but issues like we see posted, are not LCD issues. I am so convinced of this that I will buy the OP a new LCD panel if I am wrong and if this is caused by faulty LCD's or "burn-in" or because of "crystals loose their spring ".

I am pleasantly surprised at the speed and variety of feedback to my post. Thanks everyone!

I have kept the display in an air conditioned dry environment throughout its life. I opened the display for the first time about 15 months ago. It was not as dusty as I expected, probably a result of the anemic air flow.

While the suggestion of the polarizer plastic darkening sounds possible, I still lean towards a heat effect on the LCD. Sometimes when I cold start the display, the dark patterns are almost invisible, appearing later only after the display gets hot.

Regardless of what has caused this display to deteriorate or malfunction, probably it has simply worn out. I have owned three LCD monitors prior to the Thunderbolt, but I never kept one as long as the Apple display. That is entirely just because it was so expensive.

I used to have a higher opinion of Apple and their products, but they screw up just like any other company. This display might just be another case of their fallibility.