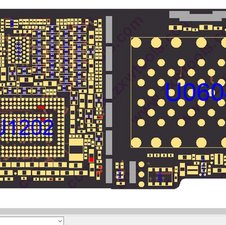 Power surge which then causes phone to reset

Doing a back light repair on an iPhone 6, had image with no back light, changed the coil and the phone died. Found two caps which were also lifted from the board so placed them back down and still had no power.

I have tried replacing U1502 with a second hand one and also the diode (as it had burnt right thru). The power returned to normal and finally pushed over its attempted boot ampage of 0.1amps to a normal ampage. This then helped in identifying a HUGE short under the U1502. I have removed it to just try and test again to see where the power surge is coming from and am back down the the bouncing 0.1amps. On VCC_MAIN i get 3.8v then a spike to 4.2 then off (repeated). I have replaced all filters and known problems within the backlight circuit. I have also replaced PWR IC and Tristar.

Is it possible to test the phone without U1502, or does this need to be in place to test boot of the phone?

I can't say I've ever tried to boot a phone without the backlight driver but looking at the schematic, I don't see why it wouldn't boot unless there is some acknowledgement required along the I2C lines.

At this point, I would check all of the pads under the BL driver IC for shorts and perform a complete replacement of the entire circuit.

Another repair that has me stumped