Is my Motherboard broken?

My LG Nexus 5 was shattered completely due to fall from height 1.5 years back. Recently, I plugged it to a charger and it could switch on but nothing was visible due to broken screen except for background white light. Hence, I bought the LCD, digitizer, Frame assembly from Aliexpress.com and decided to reassemble it myself.

When I opened up its components, few pieces fell off from the motherboard and one piece from rear-facing camera was missing and 3G antenna wire has broken off from its connector. As a noob, I just glued the pieces onto motherboard and reassembled everything. Then plugged it into the charger but haven't seen any action in past 30 minutes.

I also tried reconnecting the previous display to confirm if the replacement I have bought is faulty or not. But it didn't light up either.

Have I broken my motherboard? Can it be repaired by soldering or sth? 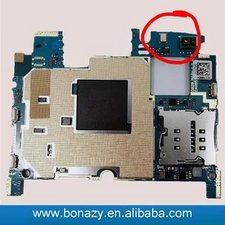 Hi! I'm sorry to hear about the tragic death of your phone...

As far as I know, if parts fell of the mother board then it's pretty much done for. Especially since you glued them back in there. Glue is corrosive, so it most likely ate away the contact points...

Point is, you should replace that motherboard. I can provide you with our guide and the link to buy the new one.

Motherboard is pretty expensive. I don't think if I want to invest so much money in a phone that I haven't been using for past 2 years, when I am not even confirm about which part has really failed. Also there is data stored in this phone, I would want to recover that.

The two parts I have marked in red (in pic), what are their function? Are they vital enough not to startup the phone?

One rear-facing Camera part is also missing but I don't care as I just want the phone to start up.

The phone cannot start with electrical components missing, regardless of their function. To recover the data from your phone, you need to restore the automatic back-up Google does via your account on a new device. If you disabled that function you are toast.

To clarify: the phone does not power up because it fails to POST (power-on-self-test), it does not get any response from those chips so it does not start. You can't get it to start up. I'm sorry, I understand that you just want your phone to work, but it really got rekt by that fall...