White lines only on top of iPhone 6 screen

So I just did a charging port replacement, and now I'm seeing these weird lines on the screen. I've tried cleaning the flex cables etc. but to no avail. Have I damaged the screen? 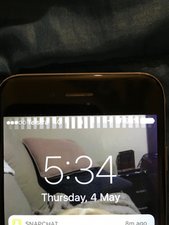 LCD cables got damaged if the LCD connector on the board visually looks fine.

Time for a replacement screen if you want that to go away.

These screens can just go bad from just moving or pulling the ribbon cables too much (prone to tear / fragile).

I got those too after doing a battery, WiFi adapter, and flex cable swap. I had a heck of a time getting the ribbon cables seated. I noticed over the next few hours, the bars started to disappear, because I had to drain the battery to less 10%—leaving the screen on at full brightness. The next day I didn’t see any bars at all, so I’m not sure what that was about, but it seems to be OK now.

Out of curiosity, did yours go away too, or did you have to replace the screen/cables?

I just changed my wife's iphone 6 battery and the same thing happened and after a few hours the lines at the top disappeared.

Also in my case the lines dissapeared after a few hours. Seems that this is happening due to working on the phone without proper grounding as explained here ( White Vertical Lines on LCD and here https://www.cansurmeli.com/posts/white-l... )

Hi Joe, I've just replaced my USB charger port and having put everything back I had exactly the same as you describe above. I cleaned the four screen connectors with toothbrush and petrol fluid and still had the hashed white lines. I tried re-connecting over and over, first one particularly tricky, and still the horizontal white hashed lines at the top of the screen. However, having found this stream, I noticed that they were fading the longer the screen was on, to the extend now a couple of hours later, they are really faint and I suspect they will go as you describe. Thank you for posting this as otherwise I would have run out of patience and taken it to Apple to fix needlessly.

I just wanted to add to the above. I too had issues with white lines after replacing the battery in an iPhone 6. I followed the iFixit instructions, which involved disconnecting the screen - I’d not done that before. But the old battery was really stuck, and I needed the screen off to get the old one out without puncturing or damaging it (bad news!).

When I replaced the screen, at first it wouldn’t even boot/start up. It would just show a fuzzy image, and the board that all the cables attach to would heat up, then it would turn itself off. I tried reconnecting them carefully 3 times, and even made sure to get a little “click”, all to no avail.

I took a break, which is sometimes essential to clear the head, then came back and tried one last time. This time I used my fingernail to really press down on the back side of the digitizer cable. I heard more clicking, though I thought I might be tearing the cable too. With nothing left to lose, I continued across the back, and heard several more clicking/tearing sounds.

With much surprise, it then booted up, but had a block of big white bars about 2/3” from the top, and it also had smaller vertical bars all across. Progress!

Based on the post here, I wondered if somehow static was causing the residual bars. I left it overnight with the display on, and in the morning, the bars had faded to almost nothing.

So for anyone experiencing the bars, give it some time :)

Obviously, repairing the damaged iOS system on your device is not an easy task, and some of you may give up the device due to the white screen of death. However, if you can find a relaible yet practical tool to help you fix the issue, things could be completely different. With iOS System Recovery , you can:

2. No harm of your iPhone, only make your iOS system to normal.

3. Safe, reliable and easy to use.

1st of all, install the program on your computer and launch it. Please be ensure your

iPhone is connected to the computer. If not, just link it now.

2nd, you can choose "More Tools" after viewing the main interface and select "iOS System

Now, you need to download the marching firmware package to the latest iOS by clicking the

"Download" button. Then you only need to wait for the end.

3rd, when the program is downloaded, it will start repairing your connected iPhone

automatically. And you only need to wait for a several minutes, then your iPhone will back