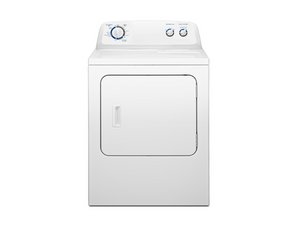 I have tried changing settings and my lower dryer will tumble but no heat? The upper cabinet works fine. Any suggestions as to what I need to replace and it is a gas dryer

Answered! View the answer I have this problem too Subscribed to new answers

Is this a good question?

If your dryer doesn't heat, check these:

The igniter is inside the dryer housing, near the bottom front, usually in a cone-shaped metal tube (the force cone). It's about 2 inches long. It's mounted to the far end of the burner tube, and it has two wires attached to it--or to the tension bracket, if there is one.

Watch the igniter. Does it glow bright orange, then shut off without igniting the gas? (When the gas ignites there's a large blue flame.) If so, there may be defective coils on the gas valve. Mounted on the top of modern gas valves, there are black electrical coils. The coils, when energized, open the gas valve. If one or more of the coils are defective, the valve doesn't open and the gas cannot ignite. Because it's often difficult to properly test the coils, it's usually best to replace both (all) of them at the same time.

On many dryers, there's a thermal fuse (a heat-sensitive fuse that blows if the dryer overheats) mounted to the exhaust duct inside the back cover panel. The fuse is about an inch long. It's usually embedded in black resin and mounted in a white plastic housing.

If the fuse has blown, it has no continuity. When this happens, your dryer either just stops heating, or it doesn't work at all. Be sure to inspect the venting/heating system before replacing the fuse to put the dryer back into operation. (You can't re-set this type of fuse.)

If you give a model number and have determined which part you need, I can direct you to the correct parts and where to get them.

you may want to call a technician.

my first guess would be the thermo sensors on the dryer. they are temperature sensitive switches that turn the heat off once it reaches a certain temperature to avoid any hazards like fire, etc.... if they go bad and never open again after the temperature drops, it can do what you have described.

it can also be it. thats why a technician would be best. he would troubleshoot all this little details...

if you decide to attempt it yourself, unscrew the rear metal panel and the wiring diagrams sheet should be taped in the inside.

I will check on that, what about the chances it is the igniter?