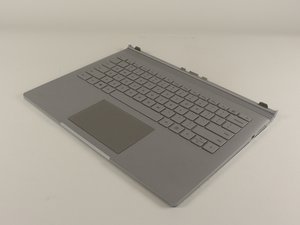 The keyboard for Microsoft’s 2-in-1 laptop released in October of 2015. 6th Generation Intel Core i5 or i7

So I bought a Microsoft Surface Book i5 128 GB model for college, right? And a few days ago, I dropped it on its side and it just so happened to create a small dent on the charging dock. Now, when I plug it in, it doesn't charge. I cleaned the connectors, and inside the jack, and I can't get a consistent charge. If I wiggle around the connector for a bit, sometimes the charging light flickers, but it never stays for very long, which leads me to believe that maybe the whole thing isn't busted and it's just the dent that's preventing the contact points from really touching.

I took it the Microsoft store and they told me that my warranty doesn't cover physical damage and that I needed to pay $599 for a replacement model, which means I'd lose everything that's currently on my SSD. I said screw that and took it to a repair shop, and they told me there wasn't a way to manually separate the clipboard from the base (which by then the Surface Book was dead and could not detach anything) and they couldn't do anything to help me. Lo and behold, I poked around online and found a way to release the magnetic lock manually, so now I have just the clipboard charging and I'm SOL with the keyboard base.

I was wondering if there was anything I could do to remedy this, because there's next to no one that sells just the base for the Surface Book. Thanks!

If you remove the Base board you will see that the connector on the surface tablet has the same connector as the base. You can charge the tablet using that connector. This model was made to be used with or without the base and even with the base reversed. There is a secondary battery in the base that increases the time between charges. I would suggest opening the base and checking the power connector to see if it is just dented or if the connection is damaged.