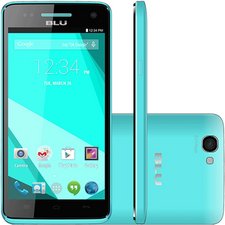 An Android 4.4 smartphone released in August 2014.

On, but only displays a black screen

Tried to turn on my phone because the screen was black. It "lights up" enough to tell the difference between locked and unlocked when you press the unlock button, but the screen won't display anything. However, the little green light flashes saying I have messages, and I can still change the volume. To turn it off though, I've had to just take out the battery. I've tried restarting it with and without the sim card, and I even charged the battery. When I called the phone, it acts like it's off, and it doesn't ring when it gets texts either. Any ideas? Or is this even worth the frustration?