I know similar questions have already been asked, but I’m having trouble deciding which issue it could be, and I don’t want to start buying parts for nothing.

Someone gave me a Mac Mini Mid 2010. When I brought it home I plugged it in, turned it on, and walked away to do something else. When I came back the screen was black, there was no response from the keyboard, and when I went to touch it, I nearly burned myself. I then powered it down to cool off.

After about 30 mins I returned to see if it would turned back on. Surprisingly it did, and I was able to get into the OS. I installed Hardware Monitor and found that the CPU was running in excess of 210F!! (You’d think it would have shut itself down?). I then took note of the fan speed using iStat Nano. The fan quickly alternated from 0 RPM to around 500 RPM, but mostly staying around 0. I installed smcFanControl, set the minimum RPM to the max, but it made no difference.

I turned it off, let it cool again, then proceeded to open it up. The fan wire was snug, nothing appeared to be obstructing the fan, and it spun easily. I then noticed that it was upgraded to an SSD, but that both hard drive sensors were missing. Nothing else appears to be broken.

Thank you to anyone for any insight!

Here's the readings I got. Before I turned it back on, I stripped it down, cleaned and applied new thermal paste, did an all around cleaning, then put it back together and made sure the fan was connected tightly. It looks near new now. I then turned it upside down without the bottom so I could watch the fan. It spins up for about 3-6 seconds, then stops for about another 3-6 seconds. The screenshot was captured during one of the spin ups. It sometimes showed it around 500 RPM, and even 1800 RPM, but I doubt it really got that high. Note the lower temperature then I was getting earlier. I wasn't running anything but Temperture Gauge Pro, because I didn't want to burn it out. I also think the new paste helped a little, as the old paste seemed quite burned up and dried out.

It's looking like I'll need to order the fan and the sensor. Should I order 2 sensors since there's 2 spots on the board for them? Also, I see people selling the fan with multiple part numbers and as compatible with more than one model. Do all the A1347s use the same fan design? 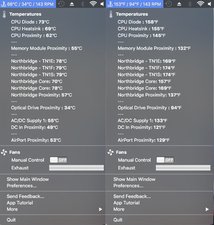 Lets get a better tool here so we can see the sensors and the fans. Download this app I think you'll find it offers more clarity: Temperture Gauge Pro. Post a screenshot of the sensor & fan screen so we can see whats up in your question. You will need to remove the other apps so as not to create a conflict.

You do want to put back the HD sensor cable as the temperature control system in SMC is expecting the input. Otherwise the fan does go into over drive. Which then gets us to the next problem here, as someone took off the sensor the fan has been running in over drive all of the time which will kill the fan! So now you'll also need to replace the fan unit as well.

I don't recommend software over-rides of the fan system. Experience has shown me do the right thing here. Fix the sensor and the fan and you should be all set. Hopefully the over heating hasn't shaved off too many hours of life.

Thanks for your help! Yeah, I was kind if figuring I'd need to replace both, but was hoping for a magical answer. I'll install that sensor and get back to you with a screenshot shortly.