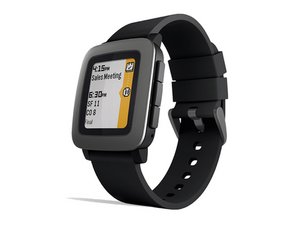 Pebble's third-generation smartwatch, released in May of 2015. Supports both iOS and Android devices, with up to 7-day battery life.

Can you teardown the charging cable of the Pebble Time?

The last time it failed I cut it open and found that the 2 wires inside the cable are a weird shiny red and shiny blue color wrapped in a thin white film.

I ran the 2 wires on a multi-meter and it measured a notable resistance, as opposed to near zero resistance on traditional power cables; which was odd.

In the end, because my charging cable completely died on me, I removed the wires all the way up to the proprietary magnetic plug and soldiered it to another USB cable I had lying around the house.