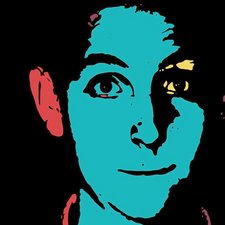 I received an iPhone 5c on which acetone has been spilled. The plastic on the back made a big bulge, but the battery seems perfectly fine (phewf), I cleaned most of the corrosive and the phone works pretty normal.

Some liquid came into the display, which is visible. The person whose phone it is says that there are often "Ghost touches" - after he locks the device and unlocks it they are gone for a while. Also some of the letters don't work on the keyboard (if the device is in portrait) specifically: 'u' 'j' 'n'. Those parts of the screen also don't react to say swiping the icons. (This happened before I started work and cleaned the corrosive)

Naturally I thought, pfft faulty digitizer, however, when I tested with a new screen, (with no liquid spilled on :P) the same problem persisted, ghost touches and the same parts of the screen consistently not working. I've tried resetting the battery, still to no avail.

Have you got any theories? Things I could try?

Clean the board again and inspect it!!It's the touchscreen controller Ic either the the connector on the board,if reflow won't help ---replace the touchscreen IC !!!!also Make sure the LCD and digitizer sits well and nothing creates pressure on them!! Peace