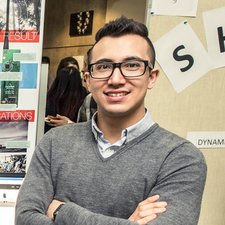 What is this mystery piece I found inside a PS4's optical drive?

I'm fixing up a PS4 and I found this piece rattling around inside the optical drive. Does anyone recognize it? Is it even part of the system? Unfortunately I have no way of testing the drive to see if it works or not, so I'm hoping someone has taken the optical drive apart and has seen it themselves. In the middle, there is "F1-05" marked. If you've got a spare PS4 optical drive, take a peek inside! 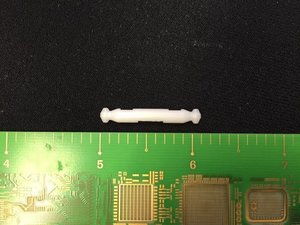 This piece is indeed a part of the optical drive. It fit's in between the two rollers at the front of the drive. I've found several of these drives with this problem. I usually replace the drive because I don't know what causes this problem. I figure if I just put it back in, even if it works it will probably just happen again in a few days or a month.

Thank you so much for the quick response! I'll update my question or post an answer with pictures for anyone else wondering where it goes.

No problem. I hope this fixes it and it works after you get it installed!

It works to easily reject or insert a disc in ps4. I solved it and I figured that it works for it.

Great pics! I found the same piece rattling around (and also the left roller was out of its position)

I'll try to put it back tonight...hope it works!

What size screwdriver do you need to get the optical drive open?

OK! Here are some pictures of the fix. I wasn't able to find any pictures of the inside of the drive at all when I was doing my initial Google searching so this should be very useful for someone who might have this same issue. To get to the rollers, simply unscrew the four Phillips head screws that hold the gear train assembly in place; the entire assembly should come off. 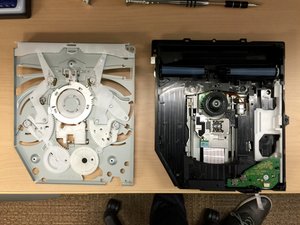 The piece is basically just a linkage for the two rollers in front so that the rolling action is distributed (only one of the rollers is connected to the rest of the gear train). Without the piece the roller shown on the left wouldn't move, causing more strain on the right one to push the disc out. 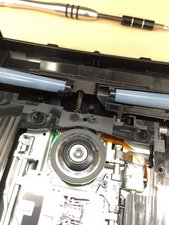 It's pretty darn loose fitting and I can see how it might pop out easily if someone grabs the disc while it's coming out or if someone pushes a disc while the PS4 is feeding it in. I just had to pop the left roller out, insert the plastic piece in between, and pop it back in. 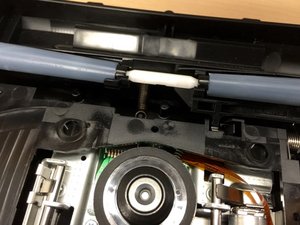 I preformed this repair before I found this answer. I opened the ps4 and removed the optical drive. I opened the drive and put this piece back together. once that was done I put the drive back into place, put the power supply back in, and closed the cover. Once all this was done I powered on the ps4... It took about 5 min for the HDMI output to come on and now if I try to put a disk in or press the eject button it does nothing like its not even there. I figured that removing the drive must have wiped its database in someway so I attempted to boot up the ps4 in safe mode to do a database restore. If you hold the power button down it will turn on then seven seconds later it shuts off again. No safe mode. I'm not sure what to do with it now, have you heard of this happening to other people?

Does anyone know where I can get a replacement one of these white bars?

@Kendra Most of the time you can find them inside the optical drive. Sometimes they are laying under the drive itself but it's almost always there somewhere.

We have some but we don't usually sell them...there is nowhere that I know of to buy them.

Does anyone know where the Black thing with the spring goes in? I cant seem to find where it came from! Please email me jenmurillo10@gmail.com

@murijen101 This shows where it goes: Anyone got ANY idea where this goes

This post saved me. It took me a bit of googling, but I finally found someone with the exact same problem as me. 30 minutes later, that little white bar was back in place and my optical drive was back in working condition. However, make a note that it may be a good idea to clean the gray rubber rollers while you have the Blu-ray drive opened up (I think a Q-tip and some rubbing alcohol would work nicely). I only say that because once I got my drive back together, it seemed like the rollers had a hard time grabbing the disc on insert and also struggled a little with ejection. Although I believe poor design choice was ultimately the problem, I think being rough with the PS4 when moving to a different room or moving it around to vacuum was the culprit. Hope this helps anyone else with the same problem.

How were you able to pop it back in?