The AirPort wifi on my MBP would only work for 1-2 minutes at start up and then lost connection completely. It's not able to detect any wireless networks at all once it fails and if I turn off the wifi I'm not able to turn it back on again. The only way to make it reconnect is completely reboot the Mac but then the same problem will recur again - connect for a couple of minutes and then just drop dead.

I'm running Mavericks and the wifi was working sweetly until I changed the SuperDrive to a 1TB HDD. Not sure if that's related but the screen hinge area where the wifi and bluetooth cards reside now runs very hot after the new drive is installed.

I removed the HDD caddy mount n reinstalled the SuperDrive (which was faulty btw) and also restored Mavericks from Time Machine. The AirPort still doesn't work. I think it's now confirmed that either the card or the cable is gone. So I ended up using a USB wifi dongle as a stop gap. Wifi is a lot slower now using the USB dongle and the Mac still gets quite hot in the heatsink area.

Hi, Fabio, did u mean this thick black tape on top of the connector? 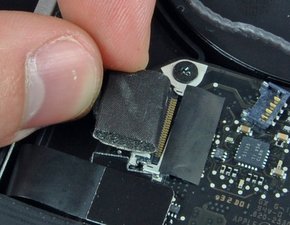 I had a similar problem. Was solved with the relocation of black tape that is next to the cable connector wifi and camera. This comes out of the monitor and connect the logic board. If the tape is out of place, u can have a short circuit there. Try cleaning the connection with isopropyl alcohol.

I mentioned the black tape below the connector. From the picture seems to be all right with the connection.

Have you ever reset Smc and PRAM? Try to restore the disk permissions too.

If none of these solve, it may be that you have a physical problem in wifi card, or Flat Cable.

Yea - I think you're cooking your wifi card… I'd stop using that drive. If you must have that drive I'd pull the card and look for a Wifi/USB dongle.

Hi, last night I've removed the 1TB harddrive from the caddy mount and replaced it with a new SSD instead and freshly installed Mavericks from scratch. Still the same results and still gets pretty hot in the heat sink area. So I guess it's out with the caddy mount and see if it returns to previous working condition.

Good plan… Do you recall the problems Tim the Toolman Taylor'd get into in his never ending quest for more power?

Hi Fabio, this is only a photo I got from iFixit website to confirm which black tape u mentioned. I'll open the baby up tonight and have a look at the state of my one.

Tried resetting PRAM numerous times. Most of the time this is the only way to get the thing started. Haven't tried to reset SMC tho. Will try that tonight.