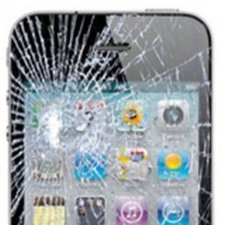 iPhone 4s, turns off and then right back on by itself

firstly, let me start by saying i've personally fixed about 1,000 devices between iphones, ipads, and ipods. I am very experienced with these devices. As with any repair shop, we mostly do screen replacements and button assemblies. However, I've run into a little issue i've never seen before and the great and mighty google has not provided much insight.

I am currently working on an iPhone 4s. Phone has never been worked on and never been wet. Still 100% factory.

It functions perfectly fine in all ways EXCEPT for when you want to power it off. Hold the sleep/wake button, slide to power off comes up. It slides and does its little spinning circle and screen goes black. Then about 1-2 seconds later it turns right back on.

It will stay powered off if I plug it directly into a wall charger though? Which has got me stumped. Dock connector shows no signs of damage. I've even cleaned it well just to be sure. Again, nothing red or water damaged inside. Tried a new battery, no change.

I've seen several forum posts online and on apples website saying if a restore doesn't fix (which doesn't fix it BTW), then take to an apple store and they will replace it. Well, no dice here. The closest apple store is about 2.5 Hours away and this phone is a customers, not mine. I'm just wondering if anybody else who deals with these devices has run into this issue and what they replaced to fix it? I hate to be defeated by a issue like this. I was thinking of replacing the proximity/power button flex. But it works PERFECTLY otherwise. So i dont think its malfunctioning to turn it back on after shutdown.

Any input would be appreciated. A million tech oriented minds are better than one.

you can try change charging port

Why my iPhone 4s turn off it self and I can’t turn it on?? Pls l help

I see this fairly regular and most of the time for me it has been corrosion on the board, or an ios update or restore fixed it, You may want to check the board closely with a microscope with all shields removed, sometimes its real hard to find it, good luck.

That's most likely to be a faulty dock connector. Try a replacement first.

If that doesn't fix it try a replacement battery then power flex.

I work for a large unnamed "refrubisher/insurance" company and we see this issue all the time.

The two main culprits are;

1. Corrosion on the board (IE: Liquid Damage)

If you don't see the first, change the second. Works 99% of the time.

I tried a few things but changing the charging port made the trick.

Same problem here....please who can tell me an liquid or spray to clean the iphone motherboard....thanks all

At the end it was the battery not correctly install

Thank you very much

yes i have seen this 4 times, 1 time it was the power button flex, 3 times it was the dock connector.

just unplug it and turn on/off the phone to check

the hard reset did the trick for me.. so thankful..was scared because its a new battery and a new charger also.

this solution helped me get rid of the problem successfully. thanQ Joe Taji.

I have problem with my ip 4s

It turned off or sometime restarts

Anyone have solution of it??